Posted on April 6, 2013 By greginthewater

The Easter long weekend and this year I was doing two swims. I had done the race over 1.5 km at Freshwater on Friday, and Sunday was the turn for Bondi to host its postponed event. There were two races on offer, the 1 km, and the longer 2.1 km. This year I had decided to only enter the longer swim, and it was race seven of seven  in the oceanswims series. It would be my sixth swim of the series, meaning I would qualify for possible prizes if I was in the top twenty.

I was hoping that conditions were better than Friday, and as can be seen from the photo, the conditions were quite different. There was little wind, it was overcast, and the seas had dropped to virtually nothing. At this time of year the water is still quite warm at around 23 degrees C (or 73 F), and very clear. As I have written before this can be the best time of year to swim: warm water, light winds, no blue bottles, and the UV factor drops from 13 to 6 reducing the risk of sunburn.

After seeing these conditions I was quietly confident of finishing ahead of the Reporter: I seem to perform much better when there is little or no chop. Besides she had entered both swims. She showed up with both of her daughters and we chatted before the one km event started. A part of me regretted not entering this event as it was only a small field, but I was very conscious of the lack of training over the last few months. 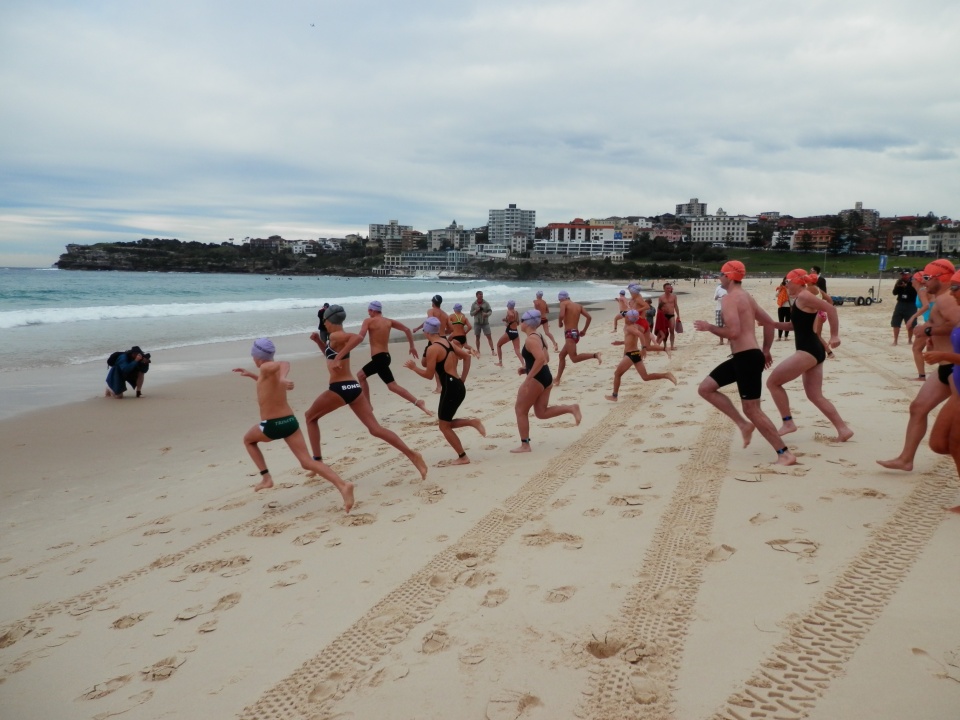 The sprint at the start of the one km

I watched the three waves of the one km race start and noticed a big difference in the energy at the start. The first wave raced to the water like starving people at a banquet: the last wave (the elder statesmen) entered the water in a considered dignified manner with lots of grace. I also noticed that there was a small sweep going north, which was surprising. But you can always rely on the water to be moving, you just have to take the time to watch it.

Before long the first race was over. I was full of admiration for the sprinting of the leaders as they ran over the finish line. I could not wait for my race to start now.

As is usual at these events there were a lot more entrants in the longer race. I think there were around seven waves, and I was in wave five with the other middle-aged males in their pink or yellow caps (two age groups combined). I headed to the right hand side of the start line to take advantage of the sweep so that it would push me toward the first turning buoy. This was the same yellow buoy used in the shorter race, but we would veer right to get to the orange buoy off Mackenzies Point.

We started and I raced to the water, and it took no time at all to get over the breaking waves. What a difference two days can make. My strategy was working well, and I enjoyed swimming in the warm clear water. Around the first buoy, then around the second to turn left to swim across the bay to Ben Buckler. At this point I switched my breathing to the left so that I could see the Bondi beachfront gliding past. In the background I noticed two A380 passenger planes doing a fly past over Sydney Harbour to celebrate some new alliance for our national airline. For the first time in 60 years they would no longer use Singapore as a hub on the Kangaroo Route to the UK, but would now go through the middle east.

I was having a great time today, feeling the immense joy you get swimming in the ocean in such beautiful conditions. I had to remind myself that this was a race as the first swimmers in the next wave speed past me. The shark net floated past beneath us, there was no swell, and the water was warm like a blanket on a cold night.

At the second last buoy off Ben Buckler there was a sharp left hand turn to head back to the yellow buoy before turning for home. As can be seen from this photo, there was virtually no waves. However, there was still that small sweep to deal with, so I aimed slightly south of the finish line to reduce the distance I would have to swim. I noticed that quite a few around forgot about this, and once again I was swimming by myself. I had noticed today that I would mostly swim by myself until I arrived at a turning buoy.Suddenly swimmers would converge like ants at a picnic, and then disappear again. Oh well it is a big ocean.

Swimming back to shore was a totally different experience to Freshwater. There was no need to back breathe to keep an eye on the waves, as it was easy to feel the slight rise of the small swells coming through. It was more important to keep looking ahead to ensure that sweep did not affect the line.

Today I wanted a small wave so that I could catch it. But alas, there was nothing when I swam in, as the sand gently rose to meet me. I stood up, and picked up the knees to run over the finish line. I had finished, and was happy with my effort well aware of the effort it had taken to finish.

After the Reporter finished and the results were posted it was clear that normal transmission had been resumed, and the pecking order had been returned to normal. In fact I had finished ahead of two thirds of that family.

This was the third time I had swum in this race, and my time today was the slowest of all three. Just goes to show that courses can be different, but it also told me that the intensity of my training had dropped off, something that will change soon.

This was the first time I had swum in two different events over the same weekend. Perhaps next season I could do it again.

The season is almost over, with the potential for some swims over the next three weekends. That would wrap up a nice season. 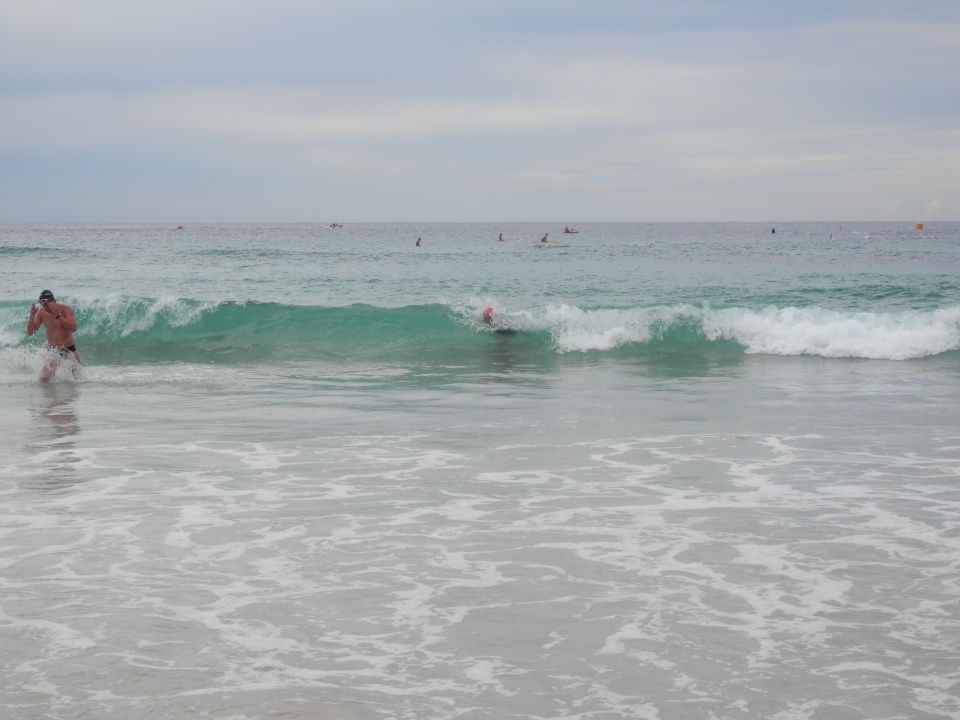