Posted on April 7, 2013 By greginthewater 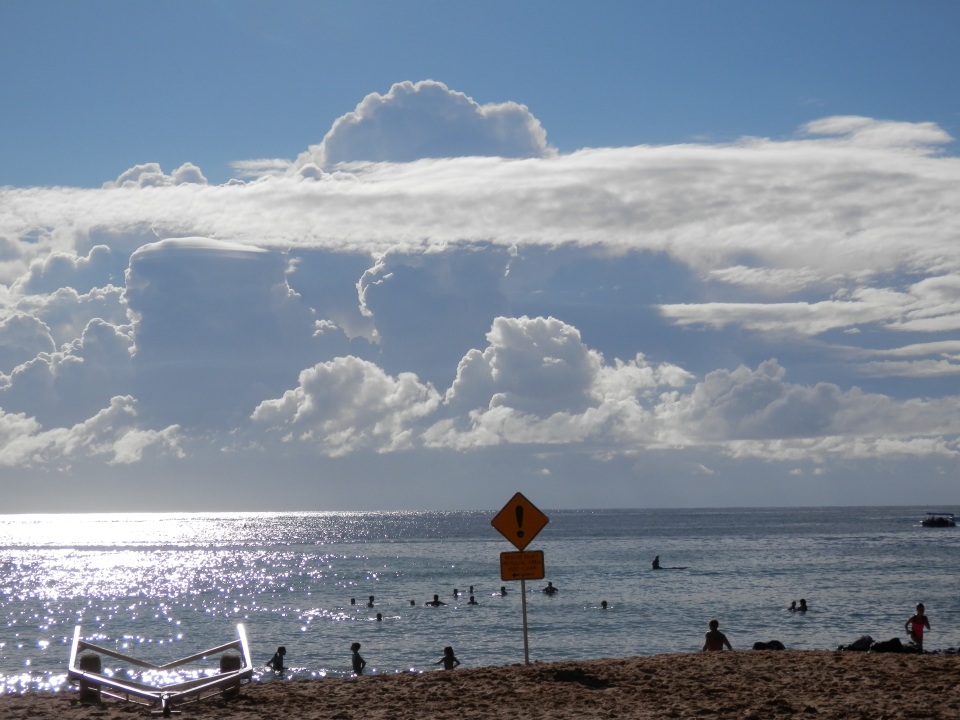 Sun and clouds over Terrigal

The weekend after Easter meant making a choice of where to swim. There was the long swim ending at Forster; the swim at Shellharbour from the boat harbour to the beach; the swim at Queenscliff in memory of Saxon Bird a surf lifesaver who drowned at the National Titles a few years ago; or two swims at Terrigal. In the end I chose Terrigal in order to swim two races on the one day.

Terrigal is about a 80 minute drive north of Sydney, and there was fog on the freeway in the usual spots around Mt White and Mooney Mooney Bridge. That is a great sign for a swim because it meant calm clear conditions ahead. The drive as also made easier as daylight saving ended at 2 am. It is so good to see the sun rise at 6.15 am again when the previous day it was 7.15 am (it does not get that late in Sydney in the middle of winter).

We arrived at the beautiful beach at Terrigal which faces north-east and is protected from the big southerly swells by the local geography. It was a glorious day, cool out of the sun, no wind, and once again little or no swell. The only issue was the forecast of thunderstorms for the morning.

The registration for this swim was old school: name on a sheet ticked off, and one cap given to cover both races. No timing chips and no numbers scrawled on upper arms. At the end of the race you get a hand written piece of paper with your time and then you give that to the recorders. So that is how it was done before technology took over, and it was great.

I had entered both swims: the one km event, and the two km event. This was only the second time for the season that I had done this, and I thought I was ready for it after doing two swims over last weekend. 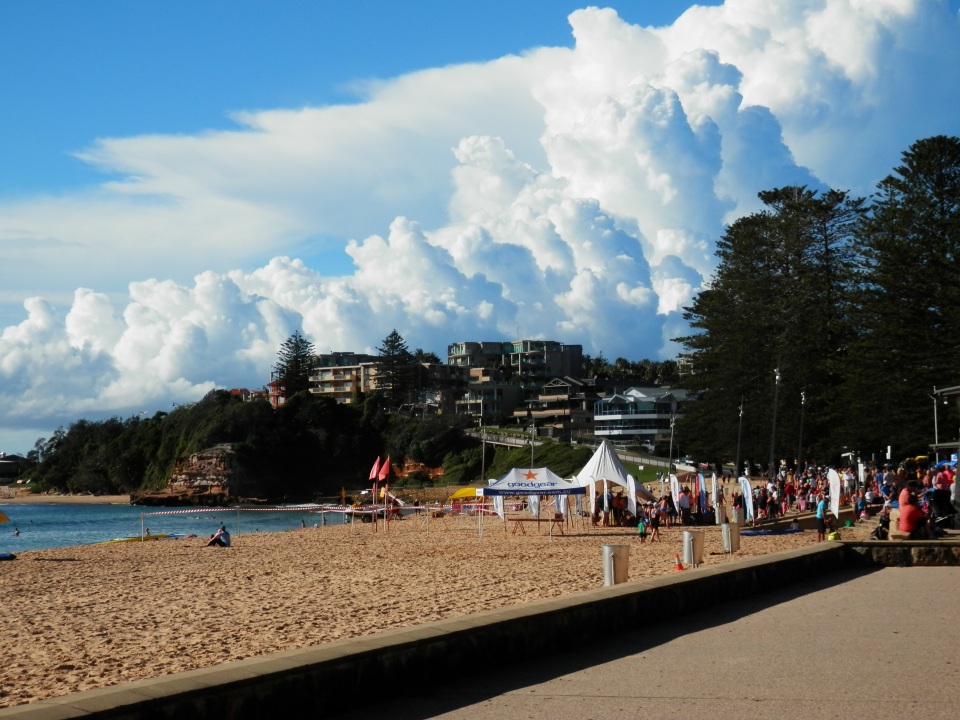 We wandered down to the shore and waited in the knee-deep water for the starting whistle for the one and only wave. It was clear that everyone was here to enjoy swimming in the ocean on a beautiful day. The whistle went and we all just started.

I was telling myself to pace myself as I had two swims to do, so I let a number of swimmers sprint off ahead of me. If I caught them later fine, if not what did it matter: it was hard to believe this was an actual race. Out past the first can, and the water was like satin, warm and clear and a joy to be immersed in. Off to the second can, and I started to go past some of the swimmers. I settled into my now familiar style, enjoying the sun on my back and the views around me.

Back to the third can for the long reach of the race, and I managed to swim in a group of swimmers. Oh this was fun. Back to the first can again, and then into the beach. As it was just after high tide, there was no chance of getting a wave until the shore dump, so I just concentrated on swimming straight to the finishing chute.

Out of the water, a short run up the beach and a piece of paper was thrust into my hand telling me I had finished in just over 18 minutes, which was acceptable. Lining up to give my time to the timekeepers I talked to a chap who told me this was his first swim. What a day to do it: no waves, no rips, no sweeps, and warm water. Gave me time, took my certificate (nice touch), grabbed some fruit and water and then sat down in the shade to wait for the longer swim.

The start of the race

I was felling a bit fatigued after the one km race, another sign that my swimming fitness has dropped in the last few months. A drink and some food, and good company on a picture perfect day refreshed me for the two km race, which was scheduled to commence about an hour after the one km race.

The briefing for the two km was held in the same relaxed style with no fanfare or fuss. There was a storm just off the coast and we could hear the thunder rumbling in the background, and the occasional flash of lightning. That would make conditions interesting if it came closer to shore, but I thought it was heading north away from us. However, the organisers decided to delay the start for 15 minutes just to make sure there was no risk for competitors. N0-one seemed to mind too much as we gazed at the ocean.

The first half of the two km race was identical to the first three-quarters of the earlier race. However, the long reach went a lot further north to something called The Ruins before we turned and headed back to the start line.

Once again we waded into the water and waited for the whistle start as the storm had cleared. As the tide had dropped some more by now, we were able to wade and porpoise about a third of the way out to the first can. There were more swimmers in this race, and I tried to keep my eye on those in the blue caps in my age group: there were not that many. 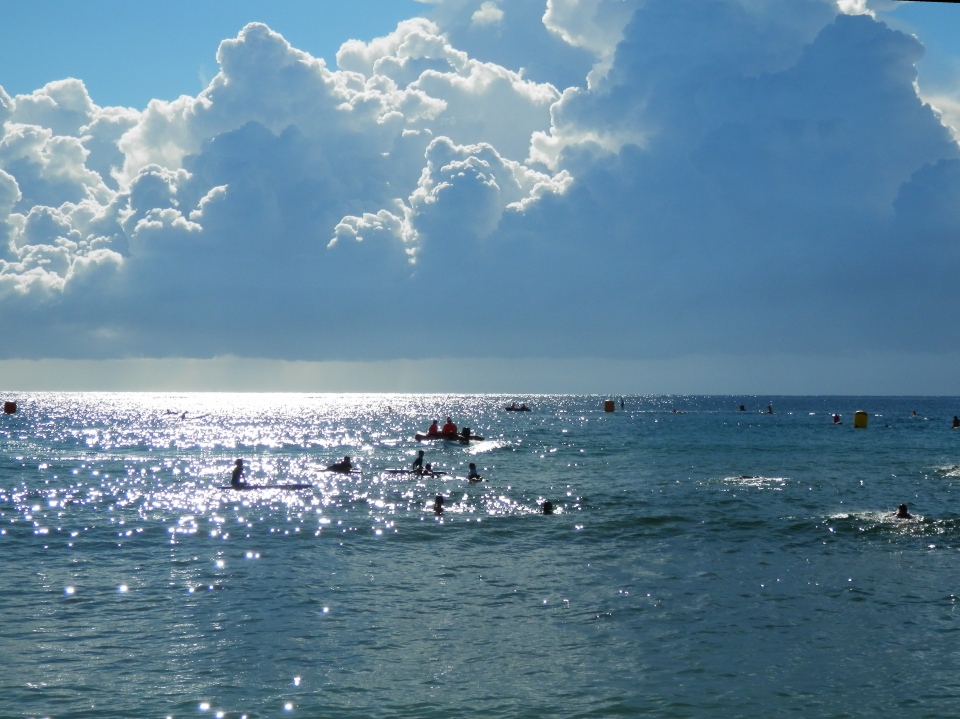 The storm that delayed the start

Around the first can, and soon the second and the conditions had not changed too much. Clear warm water, no chop and settling into my style. Just after going round the second can I was swimming close to another swimmer at a good pace. I decided to take it easy and got behind him and enjoy the drag for this long reach north. A big thankyou to this chap who swam straight and at a consistent pace, passing other swimmers with me close behind. My fingers grazed his feet a couple of times, and when I did that he kicked harder to try to shake me off. This was fun.

Around the can at The Ruins and the beat back to the club house. I lost my guide at this point once he increased his pace, but I did manage to catch up to a large group of others who were clearly fatiguing at this point.

Around the last can and into the beach. I could feel a small swell pushing me to shore and stood up and dived forward several times in a series of unsuccessful attempts to catch a wave. Into shore and I stood up, feeling very tired. I looked around and there was no-one near me, so I walked slowly up to the finish line. My time of just under 37 minutes was ok.  At the time of writing, the results have not been published so I am not aware of how I went compared to the rest of the field.

Once again gave my time to the timekeepers, took my certificate, and then off to the shade once more.

I had really enjoyed this swim: great atmosphere, great conditions, and a sense of achievement.

Off for coffee in one of the local cafes, and then a beautiful lunch at a restaurant with a panoramic view of Terrigal.

I will definitely consider doing this swim again next season especially if the conditions are this good.