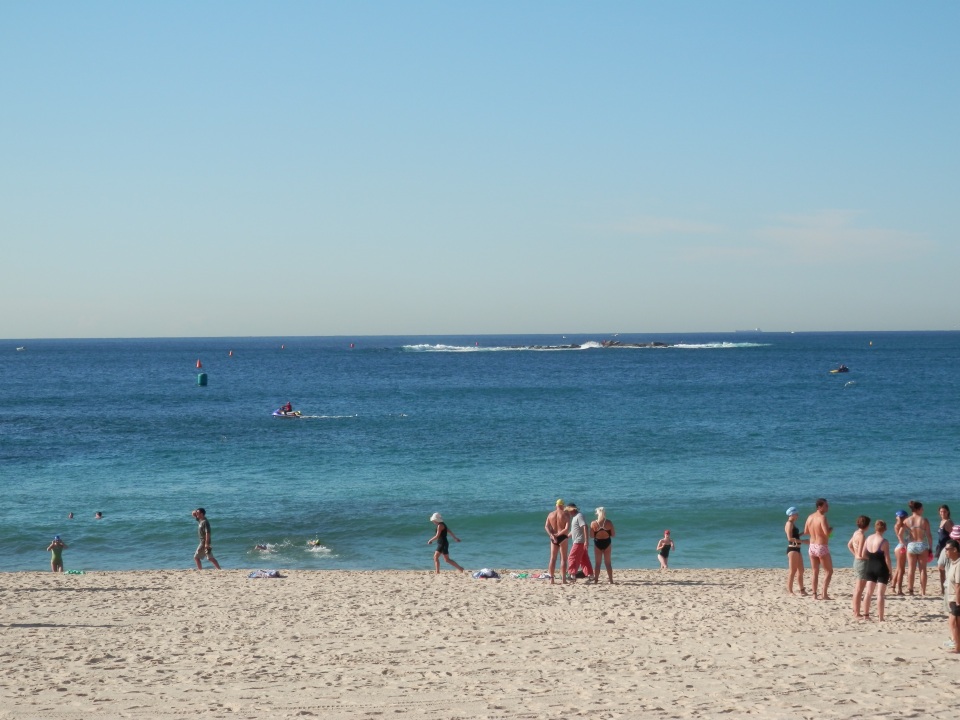 Part of the course at Coogee

Mid April, the return to Coogee for the Wedding Cake Island Swim. The local surf club is one of the few that are able to two swims a year at this iconic location. Each November the course is run, when the risk of cold water is high; and it is repeated in April when the water is warmer and often calmer. As I have said several times, it really is the best time of year to swim in the ocean around Sydney. I had done this swim a few times already, but it is always a pleasure to swim it again. This time, there were over 1100 entries for the day across the one km, and 2.4 km swims.

I made an early call to only enter the long swim this time. After watching the one km event and seeing the times, I may have finished in a top three if I had swum well. But really the long swim is the event to do if there is a choice.

I arrived at the beach just in time to see the one km race hit the water ten minutes early. There were only two waves, and they were split between those under 40, and those over 40. I watched them closely and saw that there appeared to be virtually no sweeps pushing swimmers off course. 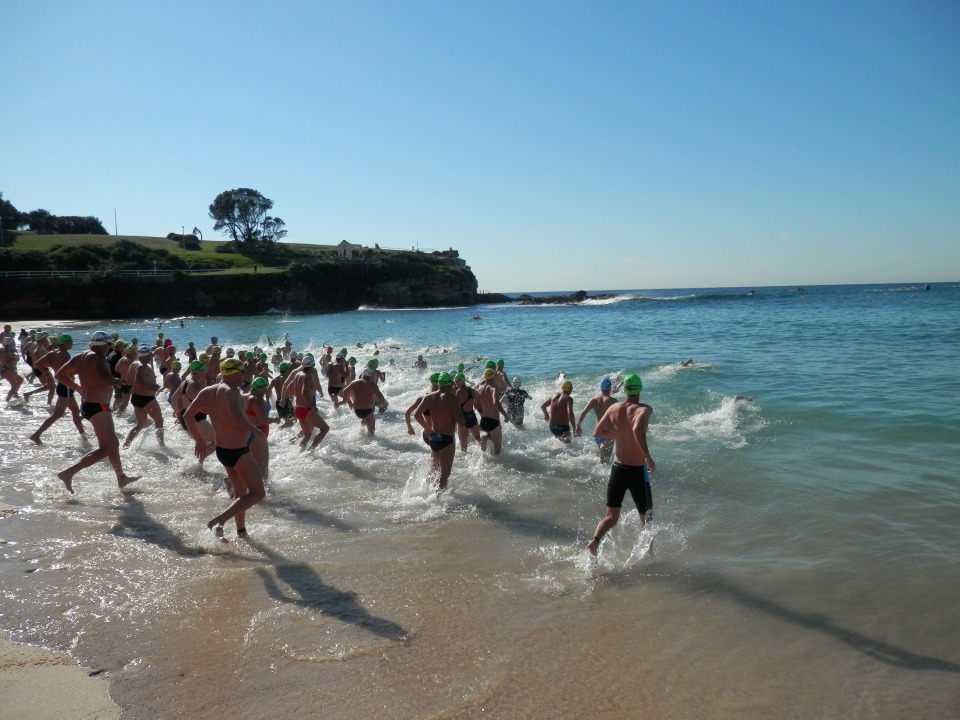 Start of the one km race

Several of my fellow squad members had entered both races, and they all enjoyed the short race as a warm up. I know that I had made the right decision, as the long course can be deceptive when you get around the back of the island.

For those of you unaware of the course for the long swim, it starts at the northern end of Coogee Beach, and heads east out to Wedding Cake Island. You swim around the island clockwise, and then return to the middle of the beach for the finish line. Today, there was little swell, just a small bump out the back, and a sometimes tricky shore dump.

The organisers on seeing the numbers entered ensured there were several waves in ten-year age groups, and then five years. I was in about wave 8, with all those in the white caps. My plan for the day was to swim at a consistent pace and enjoy the event, as it may be my last swim of the season. As my wave started, I jogged down to the water, slid under a small wave, and started stroking. I remembered to swim slow at this point to let others race ahead (the plan is to catch them later..you cannot win the race at the first can, but you can lose it, so I am told). So I started easily, got into clear water as soon as I could, and then settled down into my familiar pace. 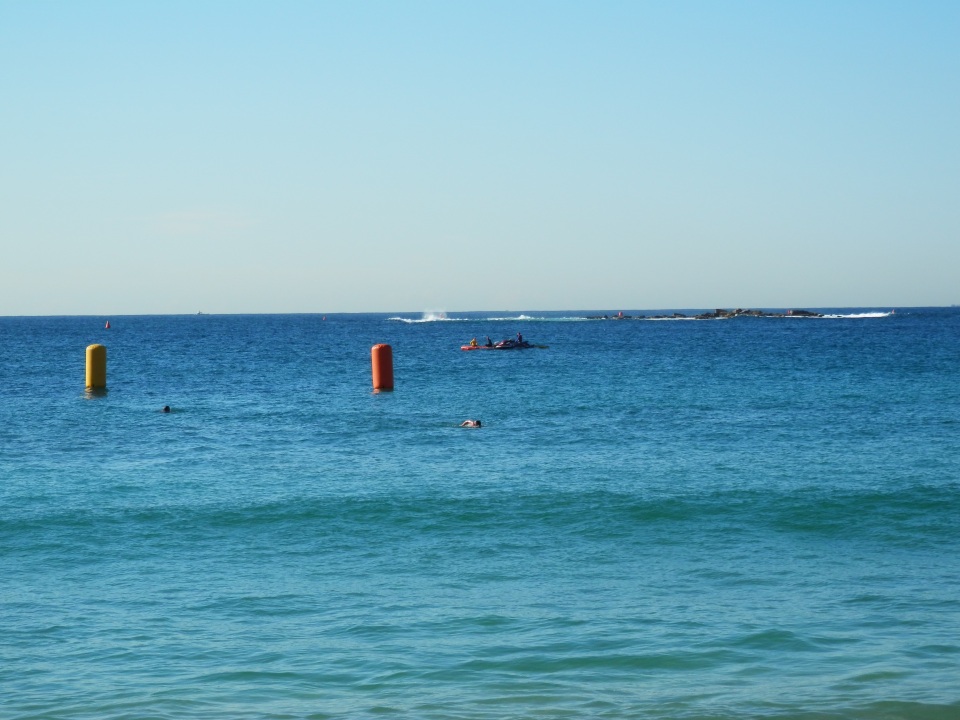 As can be seen from the photos, we were blessed with the conditions, with lots of sun, a very small swell and clear water. Swimming out to the island was quite easy,as the buoys were easy to spot, made easier by the waves in front. About two-thirds of the way out the gun swimmers in the next wave were catching me, and as they started three minutes behind me, it was clear I was not swimming as fast as I had in the past. But hey, there was plenty of fish to see swimming on the bottom oblivious to the race on top of the water.  I was also catching the slower swimmers from the earlier waves.

Getting close to the island I remembered there was a tendency for the swell to push you to the right towards the island. I looked ahead and saw that the pack was edging right, so I aimed to the left to offset the effects of the swell.

Around the back of the island, and the bottom came into view in the clear water, with all its reefs and weed waving in the gentle caress of the ocean. Hard not to be distracted.

Oh it was good to swim a course that I had swum before: the buoys were easy to spot, and I knew the general direction to swim back to shore. I maintained my pace, and concentrated on keeping my elbows high on my pull through to increase the efficiency of my stroke.

Before long I had made it back to shore, and manged to get to my feet without having a wave anywhere near me. I even had enough energy left to sprint over the finish line.

There is an interesting discussion of this course at the following link : http://www.oceanswims.blogspot.com.au/

I had done it again, the fourth time for this swim. My time was only thirty seconds slower than the same race last year, though I was placed closer to the middle of the field this time. I had missed our Irish friend, he was off swimming laps of Botany Bay as a warm up for a cold water swim he is doing in his homeland in July. Good to see he was paying homage to all those who had been transported for the term of their natural life to that place two hundred years go.

One of the nice touches for this swim is the ANZAC procession with the pipers leading the way. A nice touch with ANZAC Day just over ten days away. Little did we know that the events of Boston would overtake all the news in less than 24 hours. We all share your pain and our thoughts are with you all. 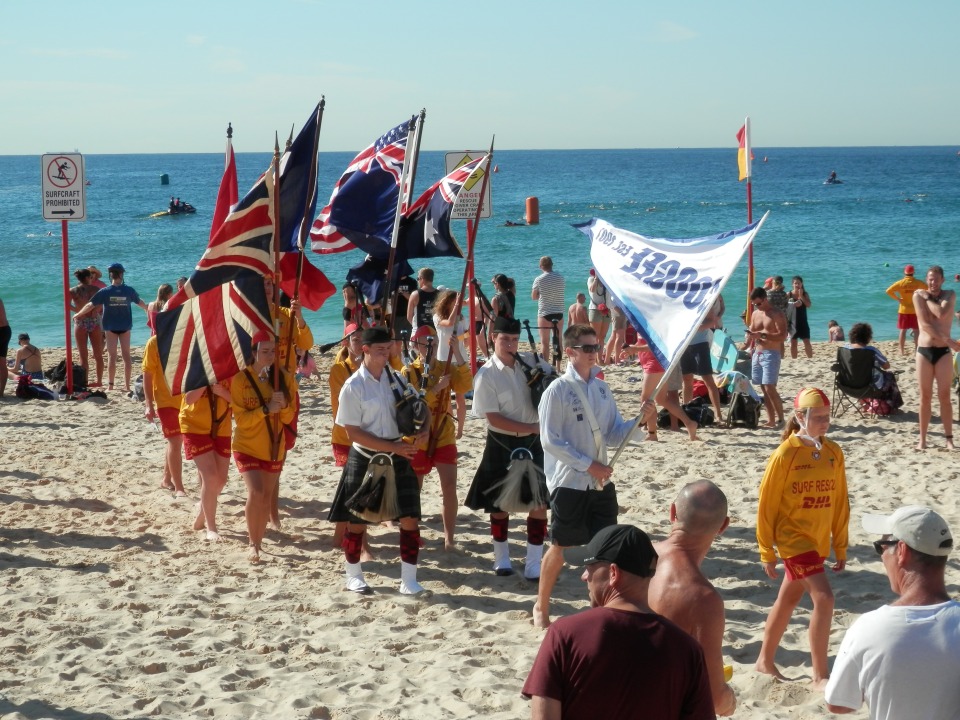 2 Comments on “Coogee in April”