Posted on February 24, 2013 By greginthewater

Sunday in February means a swimming race in Sydney. On this day there was two to choose from. One was advertised as the first nude ocean swim in the world at one of the designated nude beaches on Sydney Harbour. The other was the race at Malabar that I had done twice before, which had been renamed to honour Murray Rose. It was a tough choice, but in the end I decided to go to Malabar once again, mainly because the funds raised were going to a good cause. Besides Murray Rose was one of the greatest swimmers of all time, and I wanted to honour his memory after his death last year.

So off to Malabar. I can still remember the first time I had competed in the 2.4 km race. After turning for home just after the half way mark, I found my energy level had dropped and I was floundering like a politician before a corruption inquiry. This year though I had entered both the one km and the 2.4 km races, keen to see how I was progressing with my fitness.

Malabar is one the southern side of Sydney is a long bay. It is only one rare occasions that there is any wave at the shore, though there is often a bump at the head of the bay. I had driven down Anzac Parade on a gloomy morning with showers forecast after heavy rain the previous day. There were only four of us from the squad doing the event as most had gone to the south coast for a triathlon carnival. That left my comrades from lane seven The Reporter, the Irish Muppet, and the Scot. 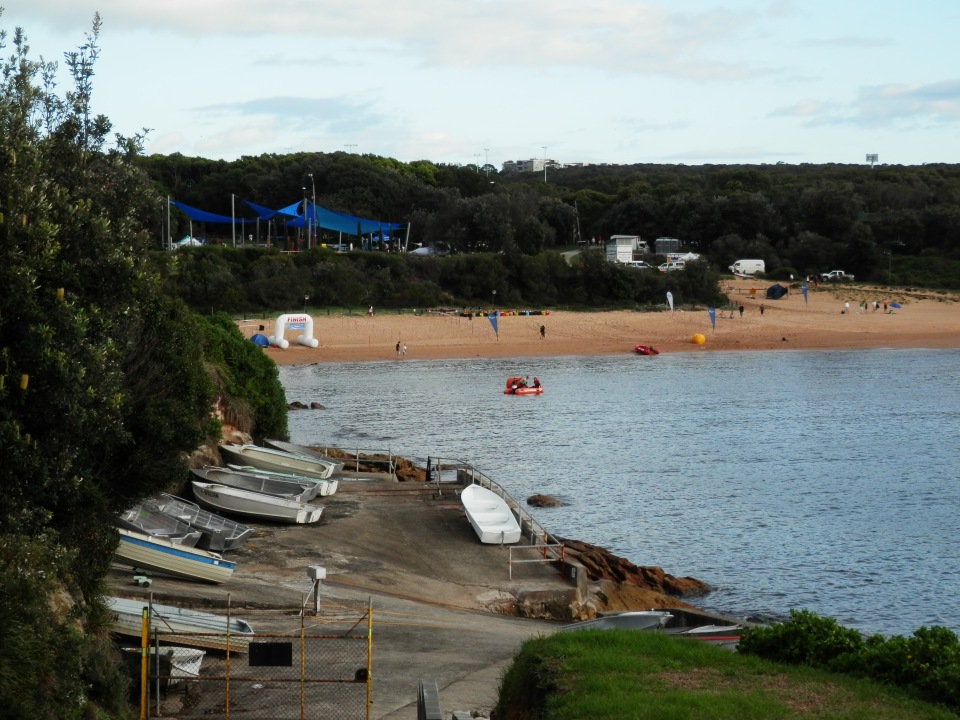 The start and finish line

The Scot and I were in the same wave as he has just entered his fifth decade. We watched the earlier waves start in the water for a change: recent big swells had erased the sand from the shore line, and there was only rocks. The elite wave was a good finish, with the first swimmer just ahead of the second one, but unfortunately for him when the leader stood up he lost his footing on the rocks and he snatched defeat from the joys of victory.

Our wave started and I told myself to use this as a warm up only. I was soon in the clear, as I had started on the right hand side of the start line, and was soon gliding through the smooth water. Around the first buoy and I was feeling fine, not having swum too hard. Around the second buoy and it was back to shore, oh how I love these short swims with no chop or swell to deal with. I decided to push myself to try to get away from a chap who was annoying me with his similar pace. As I came into the shallow water I remembered the instructions to swim as close to shore as possible before standing up. So I swam until my girth touched bottom, stood up, took a few strides and ran over the finish line. The Scot was surprised to see me so close to him, and when the times came out I had swum the one km in just under 16 minutes, and managed to snag sixth in my age group. No wonder I was tired. I grabbed a complimentary drink and headed back up to the trees where we had left our bags.

As we waited for the long swim we talked about the Irish Muppet and his intention to swim a 13 km race in Galway in July when the water may be as warm as 16 degrees (today it was around 24). A part of me was envious of his plans, as I would love to go back to NYC again for the summer. By this time the Reporter had shown up and she was over the moon that she would be going with Irish.

The Scot and I went down to the shore line waiting for our wave to start. I was still feeling the effects of the first race, and once again regretted that I had swum so hard. Oh well at least today the conditions were smooth, though there did appear to be a nice bump out the back. The organisers also had the good idea of putting big balloons on the buoys out the back to make them easier to see.

Our wave started once again in the water, and as the gun went we splashed forward like eager labradors. I could see the gun swimmers in my wave quickly pulling ahead, so I concentrated on looking at the bottom with my new goggles. It was amazing how much detail you can see when the water is clear, lots of fish, and rocks and ledges. As we headed further out the incoming swells were starting to be felt, so I shortened my stroke. By the time we arrived at the turning buoy you could really feel the effect of the ocean just letting us know that it still had power. It pushed us across the bay and it felt good to swim with it for a change.

On the way back in I was overtaken by what felt like a speed boat, but it was only one of the leaders in the wave after me. I by this time had passed quite a few swimmers from earlier waves, which always feels good. As we headed back, the effects of the chop diminished so I was able to resort to my normal stroke. It was a glorious day for a swim, with the sun breaking through the clouds, and clear warm water. Before long I was at the yellow buoy which was the turning buoy for the one km swim, and this meant about 400m to go. I was beginning to chafe as I had forgotten to apply the goo to my arms.

I kept to the left on the return to shore and swam hard to try to bridge the gap of those just in front of me. The packs of slower swimmers caused them some problems, but I had noticed them earlier and gone wide. I made it out of the water without falling over and crossed the line to the sound of the beep from my timing device. I made my way over the drinks, and found the Scot and we compared notes on the day. 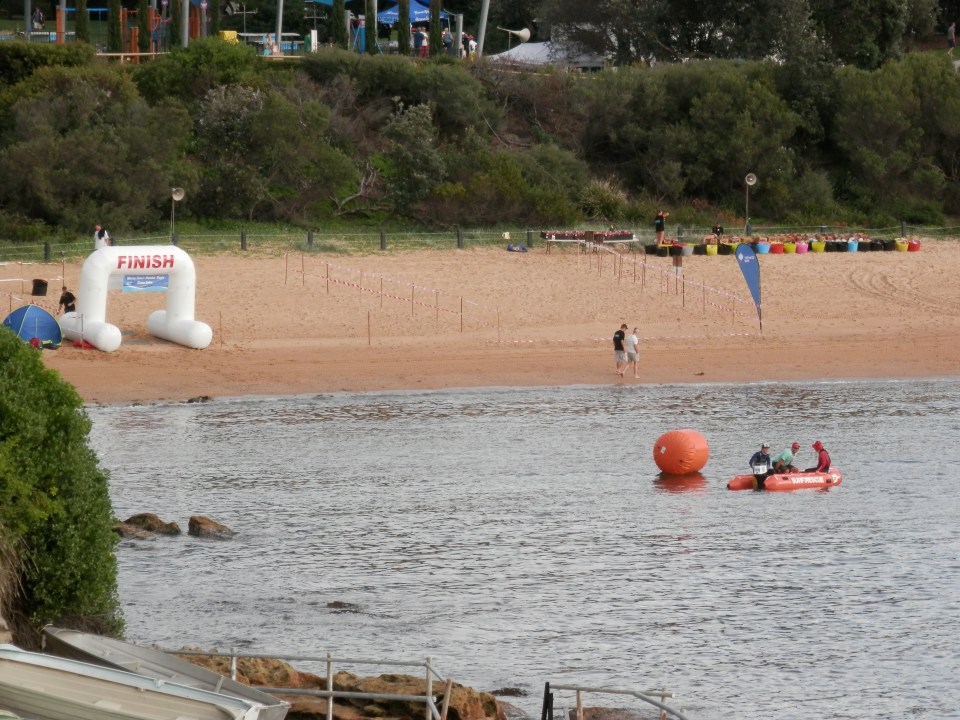 We wandered down towards the finish line to see how long before the Muppet and the reporter returned to shore. A number of other competitors were having trouble with the smooth rocks and some fell over. It was not long before we saw the Reporter jump up, and just behind her was the Muppet. As they trod gingerly as mountain goats, the Muppet went past her and was soon a few metres ahead, Suddenly he turned around, held out his arm, and the Reporter and he strode together over the finish line. Magic.

I was happy that I had completed both swims, though I was a tad disappointed with my efforts in the long swim. I had not done two swims in a day for a while, so it was good to do it.

I left before the presentation. I was contacted the next day by the organisers who told me that I did not have a time for the long swim. They asked me to estimate my time, and really I had no idea. So I told them a time which put me in the top half of the field. It was good of them to contact me and rectify the situation.

My next swim was meant to be at Bondi the following weekend. However, a big storm brought driving rain and 4m swells so the event was postponed till Easter. What a weekend without a swim, that does not feel right.