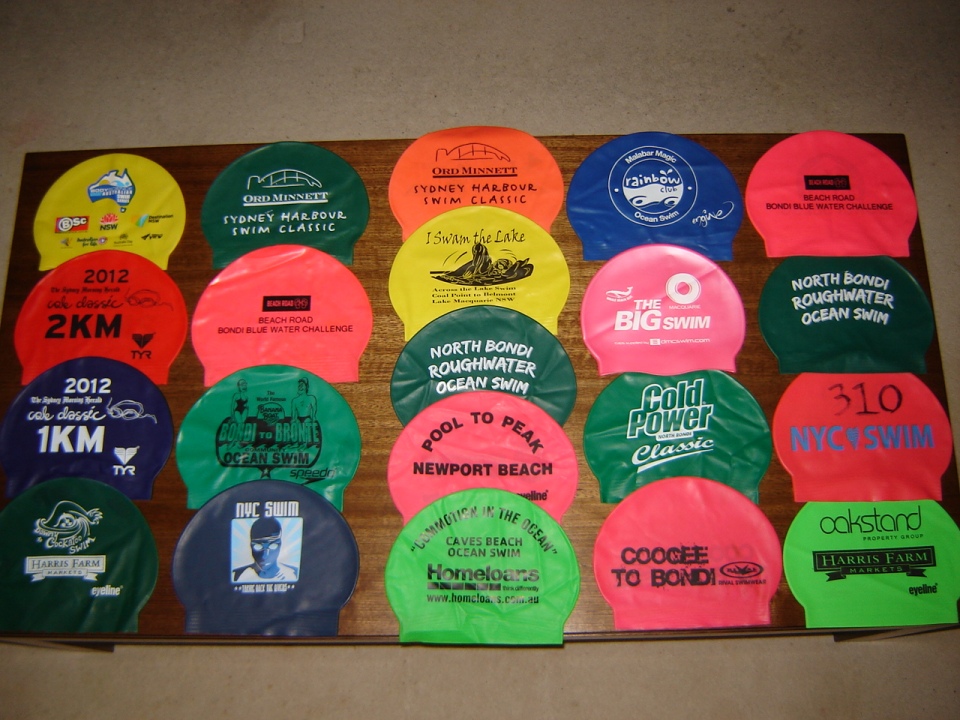 Swimming caps from the 2012 season

So these raw figures show the improvement in distance.

So these show that not only had I swum further, I had also swum faster when compared to other competitors.

The other way to see my improvement was that on nine occasions I swam in both the one km and the longer races. It is true my results in the one km races tended to be better, but I still improved in the longer races. An example of this was the Coles Classic where my time improved by six minutes and my overall placing was 700 places higher.

My favourite swim of the season was the Brooklyn Bridge swim in New York City. Why well it was my first top 50 finish, and first top ten overall. But it was more than that, It was realising that I could now compete overseas and had the ability to do so. And the location was stunning,.

My least favourite swim was probably the Bondi to Bronte, but that was because of the bad conditions. Though it did show me that I had the stamina to swim for over an hour in difficult conditions.

Another sign of progress for the season was my efforts in th pool with the squad. When I started I was in slow lane in lane eight. I quickly moved up to lane seven where I admired those fast swimmers at the head of the lane. Well during the season I improved to where I was one of the leaders of the lane, and so much so that I was moved up to the fast lane six towards the end of the season. Sure I am at the back of that lane and sometimes I cannot make the time repeat. But my swimming has got faster, and my style and strength has improved as well.

I have also made lots of friends this year through swimming, especially those from squad who get up early to get to the pool for a six am session several times a week. But I also made friends from the wider swimming community, and I am hoping to continue that.

So for the 2012 season I had done the big journey swims for the first time: Bondi to Bronte, the Big Swim at Palm Beach, and the Coogee to Bondi. I had swum at Bondi several times and I have to admit that when you are in the water on a warm sunny day with clear water it is quite special. I had swum around Wedding Cake Island off Coogee twice. I had swum at the Opera House in three races, and also around Cockatoo Island. I had also swum across Lake Macquarie again, and at Caves Beach. And who could forget Manly, swimming through an aquatic reserve with all its sea life.

For the 2013 season what are my goals? Well first off I am going back to New York to compete in three races over their summer. When I return I hope to be able to get back into training with a goal of improving my efforts in the longer swims. To do that I will have to shed some weight, and also swim harder in the races to push myself. I will have to make a decision on whether to swim the one km races as a true warm up as well.

I also have a dream of doing one of the longer races such as the Bondi to Watsons Bay or the Dee Why to Manly. If not next year, maybe soon after.  And who knows what international swims I could do.

But the most important thing is to continue to enjoy swimming in open water in glorious locations.