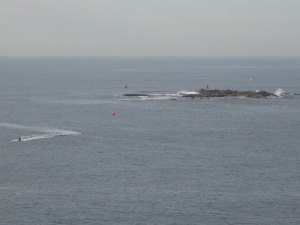 A return to Coogee Beach for the Wedding Cake Island Swim. This swim was also held earlier in the season at the end of November, so it was good to return when conditions are more benign. What little swell that had been around earlier in the week had disappeared so the ocean looked like a lake on arrival at the beach. I had decided to do both swims again, and it would be interesting to compare times and placings.

I had parked up the hill and the course looked like a picture as I walked down to the beach. Fantastic conditions warm sun, little swell and warm water. Best time for swimming in Sydney.

The first swim, the shorter one km event, was at 9.15 am, and I was in the first wave with all the other males. The course was very sheltered staying well inside the island. I had looked round for the white caps in my age group and counted twenty odd. If I swam well there was a chance of another top ten finish in my age group. Swim started and soon into the water and trying to get into a rhythm. Once again there were a number of swimmers who swam too hard at the start so by the time I had arrived at the first turning buoy a number of them were soon behind me. Conditions were very smooth so it was no problem sighting the buoys. The water was clear and not as warm as the swim last weekend (please note there will be no metaphors in this blog  trying to link the feel of the water with the touch of a lover. I bow to the experts in my squad who are better at that sort of palava).

As I turned for home I sensed that I was in the top half of the field, and despite feeling a tad tired from working my way through the pack I decided to push hard to see how I would go. I managed to swim close to another swimmer with similar ideas, and a teenage boy was not far away. A female member of my squad caught me and I swam harder just to try to beat her out of the water. We all pushed each other and fortunately I edged ahead. All too soon the sand became visible on the bottom, and then there was the gentle lift of the water as small waves formed. But Coogee being Coogee meant the chances of a wave were small until the shore dump pushed me into the shallows. I stood up and thought umm I have swum quite hard, so it was not easy getting my body to start running towards the finish line. But I managed to get over the finish line.

I was very tired from this swim, so after drying off and swapping observations with fellow squad members, I went to get a coffee. I had around ninety minutes before my next swim, so sat on the grass in the shade of a tree in the park behind the beach promenade and even managed to have a nap for twenty minutes or so. I woke up to the sight of a gorgeous friendly golden labrador looking down at me.

I went and checked the results for the one km swim, and I had achieved a sixth in my age group (best result so far), and top sixty overall. No wonder I was feeling the effects. This was an improvement in my time and placing from November, but conditions are always different so times are not a good guide.

The longer swim was rated as 2.4 km, and I remembered from the November swim that it was a long way out there and back. There was also a tendency for whatever swell was around to be felt on the seaward side of the island. But today there was hardly any swell to worry about. I caught up with Michael and Paul two of my fellow aging males from squad. They were fresh not having done the shorter swim, so they were both confident of beating me again today. I also told them of my lethargy. 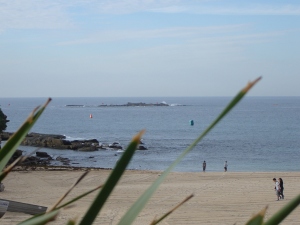 I was in wave six for this swim, and unlike my fellow squad members I did not warm up (well I had just swum one km in race conditions). As we waited behind the start line I got chatting to a chap from Virginia USA who was out in Sydney for work and had found out about the swim two days ago. This was his first swim in the ocean as all his swims had been in rivers and lakes in North America.

The wave started and I trotted into the water in the all too familiar way. At about the 300 m marker I felt tired and questioned why I was here. I ignored those thoughts and concentrated on my breathing, alternating left and right, and enjoyed the clear water and warm sun. The slower swimmers from the earlier waves made for fun as I swam round them.

At the back of the island I was distracted by the large boulders covered in kelp and seaweed waving in the gentle swells. I did not see any fish, but once again there were quite a few jelly blubbers that were disconcerting. As I swam towards the last buoy at the back of the island I noticed a red cap swimmer with a familiar stroke wearing the squad speedos. It was Paul, he had caught me even though he had started two minutes behind me. Now i had to make a decision: should I stick with Paul or let him go. As I had swum countless laps behind Paul at training I knew that he swum at a good pace . I decided to stick with him, so I let him swim past me and then I swam right on his feet, trying not to tap his toes. He was swimming at a good pace and I was very happy with that as I trusted his speed and navigation skills. I stuck with him as he weaved around slower swimmers: those feet were familiar. This made the swim a lot more fun, as I was now in that rare position of swimming with someone I knew.

I kept up with Paul until the second last buoy. I knew that Paul had only returned to training this week after a short injury induced break. I felt quite strong after following in Paul’s wake for about a third of the course. It was time to get ahead of him, so I swam around and started swimming harder, soon leaving him behind. The only worry was whether I had gone too early, but I felt comfortable all the way to the beach while increasing my kick and pull through the water. Once again the shore break was of no assistance, so jumped up at the water’s edge and ran up to the finish line.

As I crossed the line I turned around to see how far ahead of Paul I was and he crossed the line a minute or so behind me.I knew he had beaten me overall, there was only Michael to worry about now. He crossed the line about two minutes behind me so it would be close. I thanked Paul for his assistance and he was completly oblivious to my drafting (luckily I had only touched his toes a couple of times). When the times were posted Paul had beat me by seventy seconds, and Michael had beaten me by six seconds. It would be fun at training this week to compare excuses.

I had managed another top twenty in my age group and swum minutes quicker than the November swim. I was improving.

A gorgeous day for a swim. Getting close to fifty km of races for the season. Next goal the five km swim from Coogee to Bondi on Anzac day, conditions permitting. 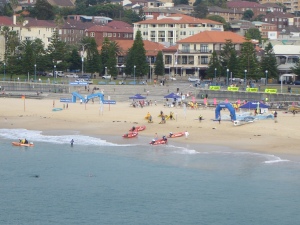