Posted on April 9, 2012 By greginthewater

Saturday and Sunday came and went without me swimming. That left Monday. I went for a long walk on Sunday morning to Boy Charlton pool and did a lazy one km swim. I had missed the online entries for Bondi so would have to register on the day. That is unusual for me as  I like to register early, but this time is different. The forecast was good with an offshore wind and small swell which would mean clean conditions.

Caught the bus to Bondi on a beautiful sunny morning with a cool wind reminding us that it was autumn now. Registered for my swim having to walk through the smoke from the sausage sizzle and bacon and egg sandwiches. They smelt good but they would have to wait until after the race. Even though I was not feeling strong I decided to enter both swims as the conditions looked favourable.

I caught up with others from the squad just in time to help them put up the tent. The wind had a real bite in it but at least the sun was shining.

The coffee was hot and that helped to warm me up. The warm up was good as the water was warm and caressed the body like a lover. The waves were a nice size. The course was straight forward: swim around the two yellow buoys for the one km event; and for the two km event swim past the yellow buoys and then further out to the three orange one and return to the beach. It all looked good.

I had done this event last season but had only done the long swim. It would be good to judge how far I had come in twelve months. There was a good representation from the squad. It was good to swim with familiar faces. I gave some advice to one squad member who was competing for the first time. Told her things like swim out in the rip, watch the waves in front of you to see which way they go, look up to sight the buoys, and swim back in over the sandbank. Luckily the organisers had placed the start line at a rip and the finish line near a sandbank.

I was in the fourth wave for the one km event. I counted the bright pink caps in my age group and got to fifteen. Good that meant a top twenty place and if I was lucky a top ten. I noticed that the earlier waves were heading towards the right instead of heading straight to the first buoy. So I decided at the last moment to start on the left not the right even though this would mean a slightly longer route. We started and I jogged gently down the sand and entered the water. It was crystal clear and warm, and only a couple of waves to get through. I could see the sandy bottom all the way out to the first buoy, and even noticed  schools of fish.

Turned the first buoy and was then surprised that the second buoy was not level but was further out to sea. I wanted to pace myself so settled into a nice rhythm and found some swimmers near me swimming at my speed so kept behind them to conserve energy. I turned the last buoy and noticed I was still a long way out. Kept swimming and remembered the coach’s instructions to keep to the right of the finish line to swim back on the sandbank.

Got through the wave zone feeling quite tired. I only walked out of the water and then a gentle jog over the finish line. Other squad members found this race a challenge even though the conditions were fantastic.

I contemplated not doing the longer race, but because it was now a lot warmer I did not give in to that idea. However, I did not do the traditional squad warm up before the race, as I had just finished the one km event. That should have warmed me up. Luckily there was an hour between the start of both races so I had time to eat some chocolate and have a drink.

Once again I was in the fourth wave, but this time there were a lot more competitors. I decided to enjoy this swim as I had done over twenty races for the season and it was a nice day.

We started and out we went. Had a good start and soon settled into my rhythm and started passing others in my age. I really enjoyed the warm water and before long was turning for home after getting slightly distracted by the patterns on the bottom near the last buoy. I was swimming with a couple of others in my age group and despite the earlier swim was feeling quite strong. Some I put in longer strokes and increased the kick to try to swim away from them. This was successful and before long the wave zone approached. I almost caught a wave but I relished the feel of the waves gently lifting me towards shore.

This time I waded out of the water and ran past some others, and sprinted up to the finish line feeling strong. Smiled for the cameras.

I enjoyed the longer swim much more: a thought shared by several of the other squad members. By now my long sleeve t-shirt was too warm, unlike earlier when it was not enough to stop the wind cutting through me.

An enjoyable day and I had done better than last year. Good to know that results reflect your own conceptions. 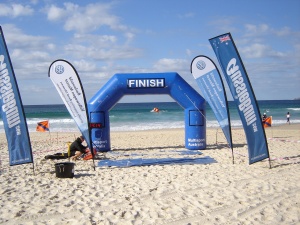