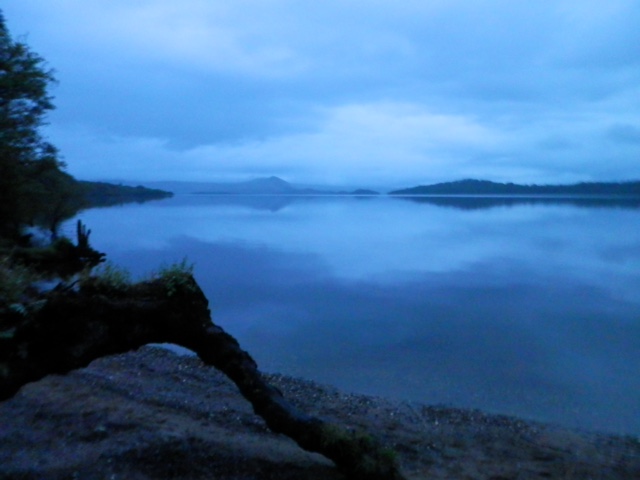 After my last swim event at Milarrochy Bay, I realised that I just had to get in and swim some more to adapt to the Scottish conditions. As part of that plan I went for a sunrise swim on the summer solstice in Loch Lomond. The above picture was taken just after 4am on that day, as at that time of year the sun rises at around 4.30am, after setting around 10.30pm. It should also be noted that between these times there is not any true darkness as Glasgow is that far north. Leaving home just after 3.30am I noticed a number of people walking the streets of Glasgow coming home from a night out.

The arrival point for this swim was on the western shores of Loch Lomond at a wee beach, a short five-minute walk from where we parked our cars. When I arrived there was already a dozen cars in the lay-by and we all chatted as swimmers do in the pre-dawn twilight.  We all picked up our bags to carry our swim gear, wet weather gear and breakfast food, and walked down the wet track.  We picked our way to the beach and I was met with the scene above of a calm Loch Lomond with low clouds hugging the surrounding hills. It really was magical to be in this place at such an early hour. 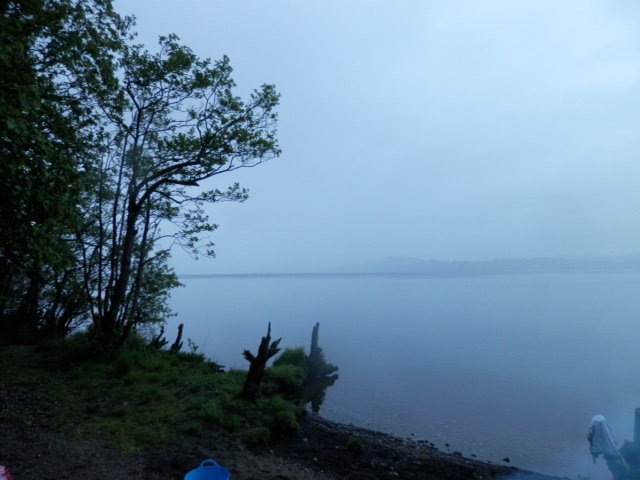 The sun is there somewhere

As the party of 15 or so prepared to enter the water, the local midges celebrated by swarming around us all. This was my first experience of these wee flying creatures that are in plague proportions, and I was not very impressed. We all dashed into the water to escape them. As you can see from the photo, it was windless morning, just perfect for dip, though the water was quite refreshing. We all floated around and had some fun, but before long we headed back to shore for a quick breakfast.

I thoroughly enjoyed the swim, one of the top five swims of my life, swimming so early in the morning in a beautiful location. It was a shame to leave the group as they huddled around the fire and ate their breakfast, but I had to work later in the morning and I wanted to get some sleep before then. It was nice to walk through the misty rain back to the car and drive back home on deserted roads. A big thankyou to the wild west swimmers for giving me an opportunity to have this experience.