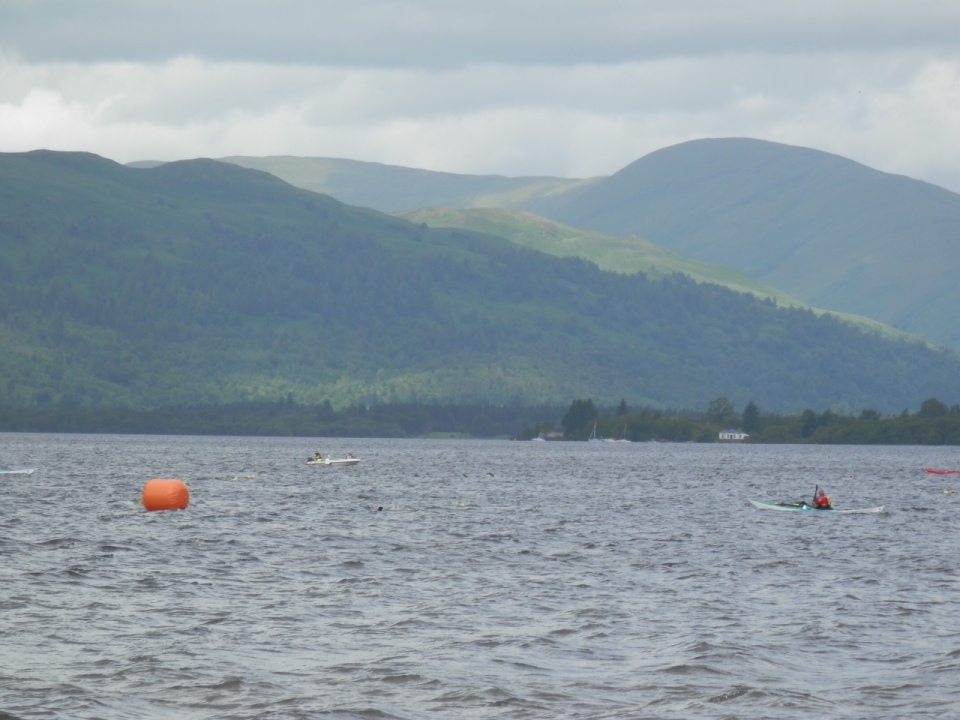 Loch Lomond with the green hills

I entered a swim at Balloch on Loch Lomond called the Wee Beastie swim to be held in late July. This event comprised three distances of 400m, a half-mile, or the full mile. The swim was to be held on a Saturday afternoon, with the Scottish Aquathlon in the morning, and a full day of triathlon on the Sunday. After my last swim event I decided to enter the half-mile, and was surprised to be placed in the super veteran class. 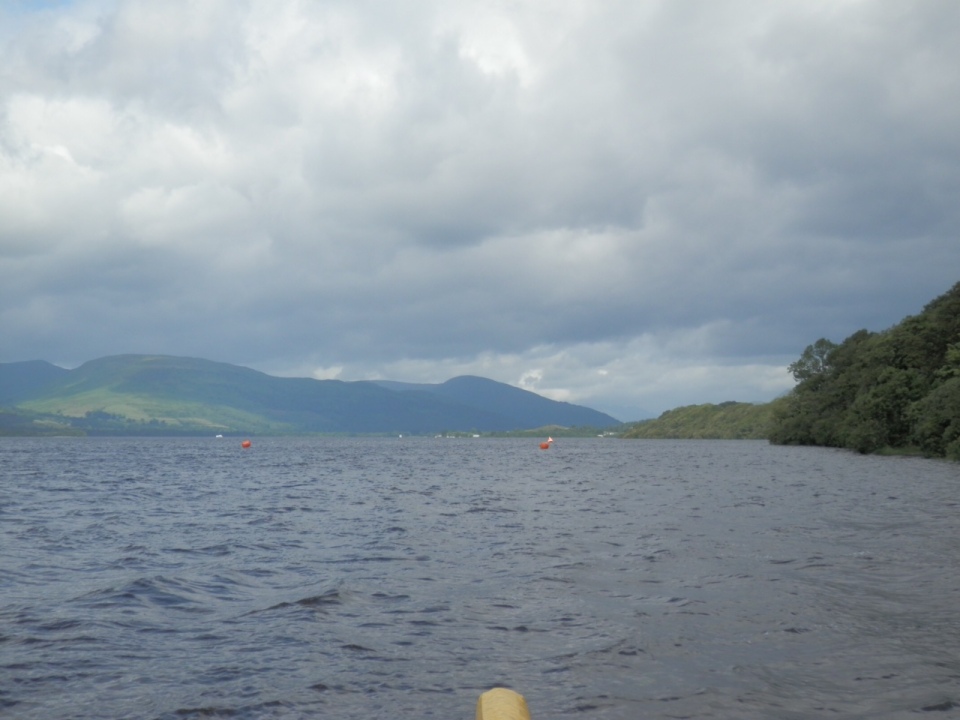 In order to get more swims in I swam a few times at Balloch with my social swimming group the Wild West Swimmers. On one of these swims, we were greeted by eight ducklings as we entered the water. They were fascinated by our feet, and they enjoyed showing us how they surfed the four-inch shore break. On that day a group of us swam around 2.5km swimming into a decent chop for the first half, before turning for home to receive the push.  A few days later we swam a bit further from the slipway at Balloch up to Duck Bay and back, a distance of  just under 4km, where we had to wait for ferries, jetskis and float planes. Good to see so many people enjoying the water.

This gave me some more confidence for the Beastie swim, especially as I swam in a swim wet suit instead of the surf wet suit I used at Milarrochy. It sure makes a distance.

I also did a few swims in Glasgow at a quarry which was the clearest water I have swum in since Croatia and Vanuatu. Like the blue hole in Vanuatu, this quarry had limestone rock which helps to purify the water, meaning visibility was at least 8m. I also did a few swims at a secret lagoon with some friends on the southern outskirts of Glasgow. One of the great things about this city is its proximity to a range of wild swimming places. 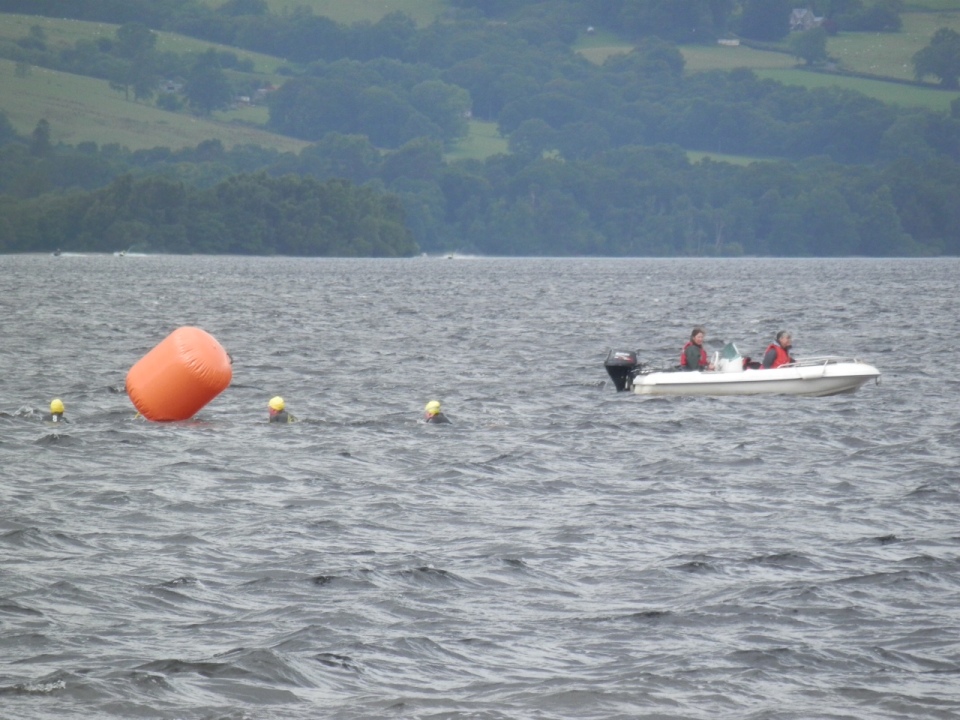 Swimmers coping with the chop

Now one of the lovely things about living in Scotland is that you never take a sunny day for granted. The day before the swim was to take place there were gale warnings and heavy rain. For those of you who are golf fans you may have seen the British Open at St Andrews dealing with adverse weather on the Friday. I was working outside on the morning of the swim and the wind was blowing a dog off the chain, and the rain was showing why umbrellas do not work here. Would the swim be on?

I drove up the A82 to Balloch as the sun started to reassert its presence. I parked the car and walked past the grounds holding the Highland Games as pipers played their bagpipes. I must be in Scotland. I arrived at the registration area for the swim as the presentation was being made for the aquathlon. So while that went on I wandered down to the shores of the loch and looked at the course. 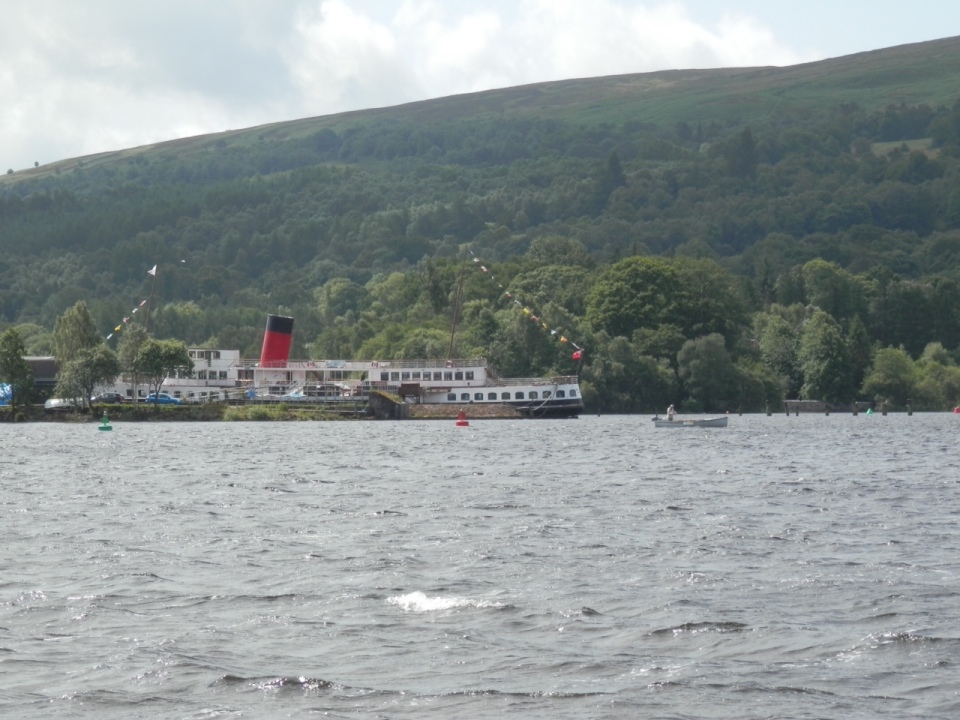 Maid of the Loch

The wind was still quite fresh, and it was coming across the course. So there would be a bit of chop to deal with, which would create some issues for some of the local swimmers. They do not have the sort of experience I have in adjusting your stroke in these types of conditions. I went back up and registered, and noticed they insisted on writing your swim number with permanent marker on your left arm and right leg, even though every competitor was wearing a wetsuit. This was in case of emergency for identification purposes.

The course was straight forward for my half-mile event: start in the water, out to the first circular buoy, then to the pyramid buoy, back to the other circular buoy and back to the starting line to finish. I entered the water for an acclimatization in the cool 13c water, and it was cool, even though I was not wearing boots, gloves or neoprene hat. The other swimmers looked concerned by the chop, but I thought that would even out my potential lack of pool time. 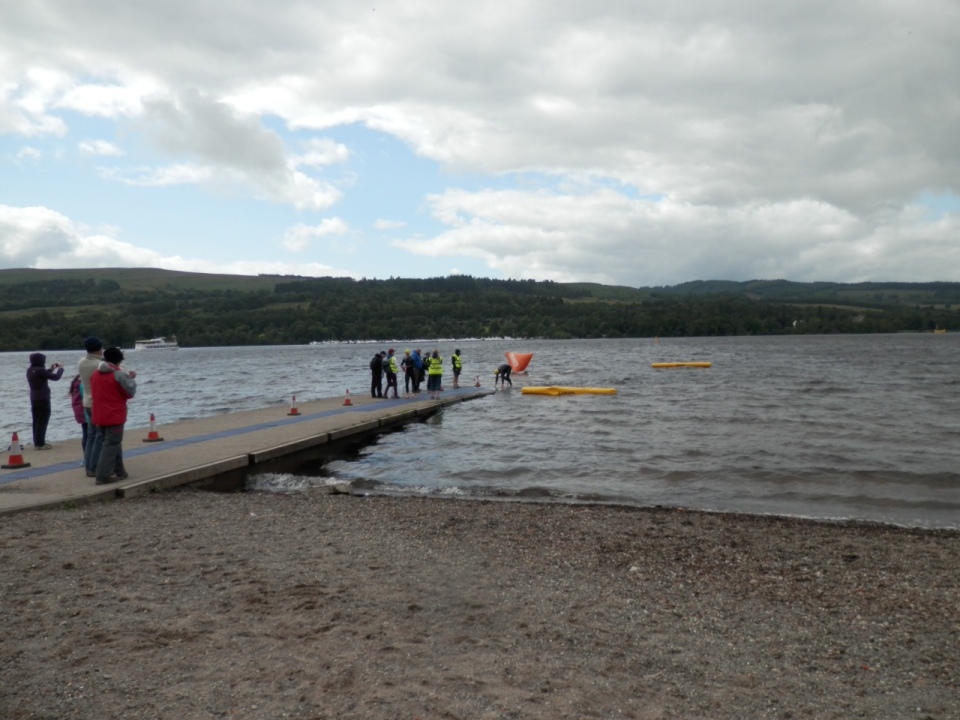 The start and finish line

I like they way the swim organisers in Scotland conduct a count down at 2 minutes, one minute, 30 sec, 10s, and then go. This helps swimmers get used to the cold water, and reduces the potential for cold water shock. When the siren went I pushed off and headed for the first buoy. Now my race was combined with the 400m race, and we all had the same coloured caps, so it was not possible at the start to determine who was in your race. There were around five swimmers ahead of me after 50m, and I noticed that some of them were not swimming a straight line to the marker. My regular sighting confirmed that I was swimming a good line, despite the push from left to right by the chop and the wind. By the time I was near the top of the course I noticed that some of those who had been 30m or so in front of me were now doing breaststroke. This told me they had gone too fast. I tried to keep a constant pace up and swim my own way. 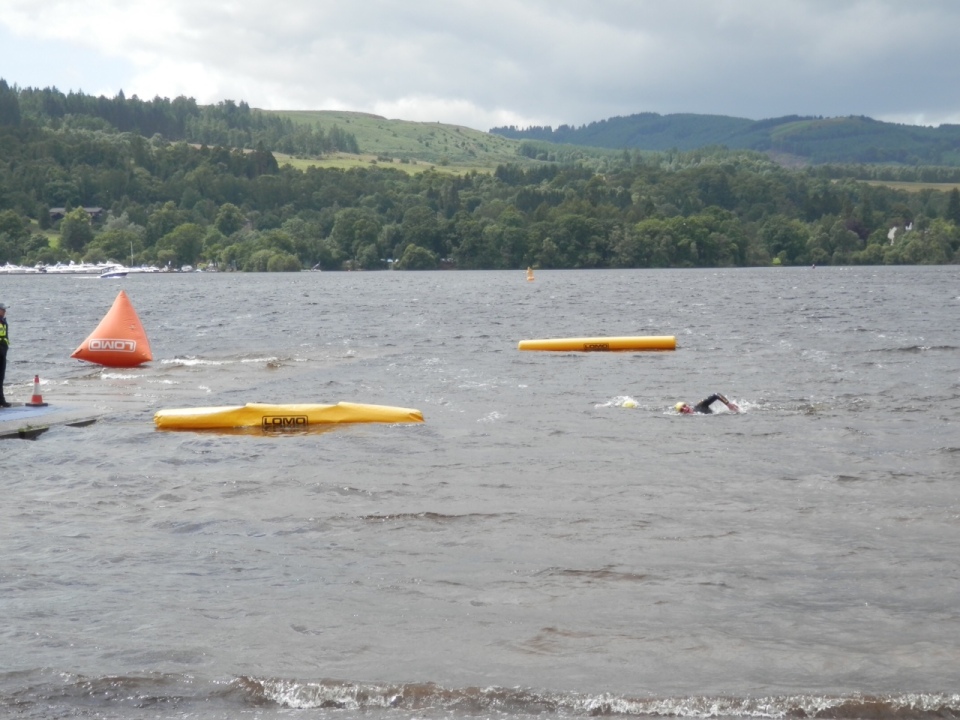 Close finish in the one mile race

The chop did make it interesting, and I was glad that I could breath on both sides. At times the chop did interrupt the stroke, but I recalled all those times I had swum in the ocean in Australia in similar conditions. I reached the half way point of the course and headed for home, dodging some swimmers swimming the other way. I noticed the leader was off to the left having been pushed there by the chop and the wind. I caught the person in front of me who was alternating between breaststroke and freestyle. We matched strokes for a while before he too fell behind.

At this time my thoughts turned to advice my coach in Australia had given for situations like these. I had not listened too closely as there I was never in a situation where I challenged for the lead. But what I did remember was to increase the pace, keep a good line, and save some energy for the sprint at the finish.

We passed the last buoy and the three of us were within 15m of each other, and I seemed to have the better line. I tried to slowly increase my pace, but the combination of the side chop and my lack of tough training made that difficult to hold for very long. As the finish line draw nearer,  thought hey I have a chance of at least a top three finish here, and with any luck I may just win. Two of us were swimming stroke for stroke, but I just could not keep up, and about 10m from the finish I dropped back.

As I climbed up onto the slipway I had my time recorded and congratulated the first two place getters.  I did notice they were quite a bit younger than me as well. I went up and got changed and then came back down to watch the one mile race, and cheered on the swimmers.

So  in the end I was the third finisher, which is my best effort ever.  I was also first in may age group.

Now that I have been involved in swims as an organiser, water safety and competitor I wanted to thank the efforts of the organisers and water safety for this swim. They did a good job in less than favourable conditions.

With the confidence I have gained from this swim, I will enter the two-mile race for the Great Scottish Swim to be held in late August. I will just have to get some more swim time under my belt.