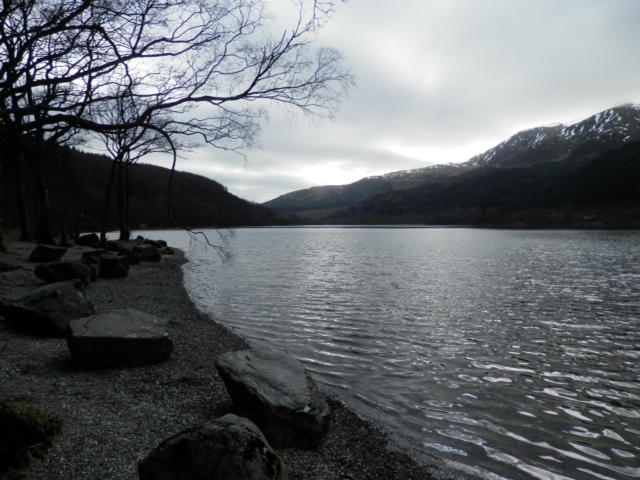 It is spring time in Scotland which means that the days are getting longer, and it does get sunnier. Last week it was wall to wall sun for several consecutive days with temperatures nudging 20c. As I write this blog entry I am looking out the window at strong winds and a mix of snow and rain falling. Oh how the weather teases and tantalises those from warmer climes with its flirtatious glimpse of warm summer days.

I have not swum any events, but have continued my exploration of some of the lochs nearby. In early March I swam at Bardowie Loch with a water temperature of 5.8c, requiring me to wear all my cold weather gear. I was still adjusting to the burning pain on the cheeks as I swam freestyle, while thinking seriously of swimming breaststroke with my head up. I was slowly getting used to the feeling, and managed to swim for around ten minutes or so. 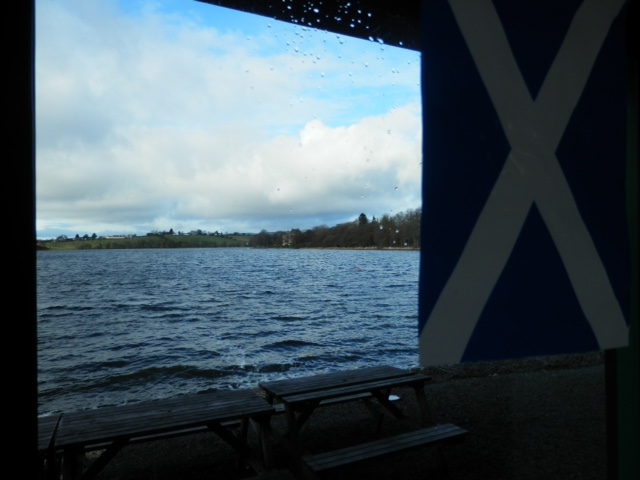 Bardowie Loch on the outskirts of Glasgow

A week later I was swimming at Loch Lubnaig in the Trossachs with some hardy souls from Wild West Swimmers. The water was cold, and even with the wetsuit on I could still feel that lovely trickle of icy water down the spine as it came straight from the snow-capped hills. I was amazed at the efforts of some of my fellow swimmers who swam in just their swimming costume in readiness for some ice swimming events. The photo at the top of this blog shows the cloud, the wind and the cold water.

Easter time it was a chance to return to Luss to have a swim again. When we went on New Years Day we had the place to ourselves; on the Easter weekend with the sun out it was almost impossible to find a parking spot in the large car park. This time I managed to stay in for around 20 minutes as I was adjusting to the cold water, and even swam freestyle the whole time.

A week later I was swimming at Balloch in the early evening, and by now I was getting used to the water. Well that was what I told myself, but it had warmed up to around 8c, and you do notice the difference. It was great to swim as the sun slowly dropped to the horizon, especially with the glow hitting Ben Lomond as it looked over our swimming spot, and the words of the song Loch Lomond went around in my head.

I had also taken a trip down to North Yorkshire to get some more swimming qualifications. I had obtained my teaching award which allows me to teach swimming in a pool. The trip to Richmond was to enable me to obtain my full open water coaching qualifications. We did the practical at a stunning privately owned lake at Ellerton which is fed by a combination of river water and springs. The day I was there the water was a tropical 12c and I relished the chance to stay in the water for 45 minutes despite the cooling breeze blowing in from the North Sea.

Ellerton water in North Yorkshire was a joy to swim in

The next day I was back at Bardowie Loch and despite the 9.4c water I managed to swim around two kms on a lovely sunny morning. By this time I had adjusted to the cold water, and did not seem to feel that cold water burn on the cheeks. It was great to stretch out over the triangular course with a large group of 40 or so swimmers at the start that had dropped to less than 10 when I had finished. Most of them were triathletes having their first swim for the season and some of them were not enjoying it at all.

A few days later and another early evening swim with the swim crowd. This time we were at Duck Bay just north of Balloch on the western shore of Loch Lomond. It was fantastic to see the loch on a beautiful warm spring evening, with clear refreshing water to swim in. The jet skis that were buzzing around stayed away from us as we headed along the shoreline to commune with the sun and water. I enjoyed the views of the surrounding hills covered in yellow spring blossoms as we swam. This sure was different to swimming in the ocean in Australia: less buoyant, no sunburn, no wee nasties, no waves, no tides, and no surfboards. 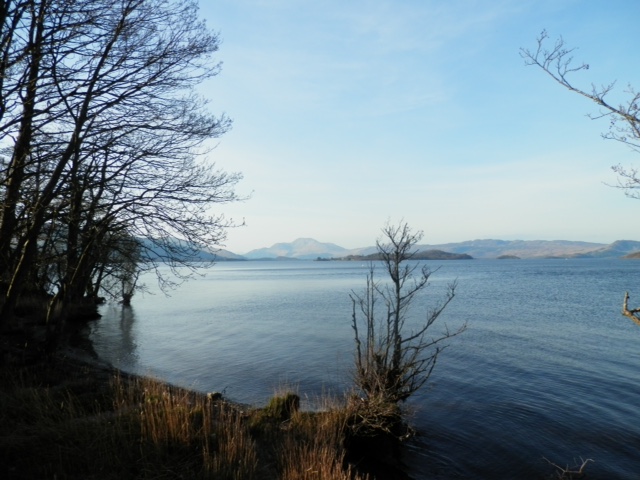 Duck Bay with Ben Lomond in the distance

My last swim was at Balloch next to the Maid of the Loch on the weekend. The warm calm weather of the previous week had been blown away and on the way to the loch on the train there was rain and sleet. Another lovely day to swim in Scotland. Upon arrival there were several keen swimmers eager to get in before the next squall hit. So off we went, enjoying the path through the rocks that had been cleared by a local triathlon club a few days previously. A few of us punched into the wind and chop coming straight down the loch as we did the one km loop over to the marina and back. It was great to swim through chop again, i had not realised how much I had missed it. The water was a pleasant 9.6c this time, and I realised I was adjusting to it. I never thought I would be so happy to see water hitting 10c. My next aim is to start swimming without some of the neoprene: will I discard the boots, the gloves or the cap first? And the wetsuit…welll that could wait a bit longer yet, though I want to swim in the summer without it at some stage.

It is a new experience swimming in lochs, but thus far i have thoroughly enjoyed it. This type of swimming is so different, but it is great to swim with people who enjoy the water as much as they do.