Posted on February 20, 2014 By greginthewater 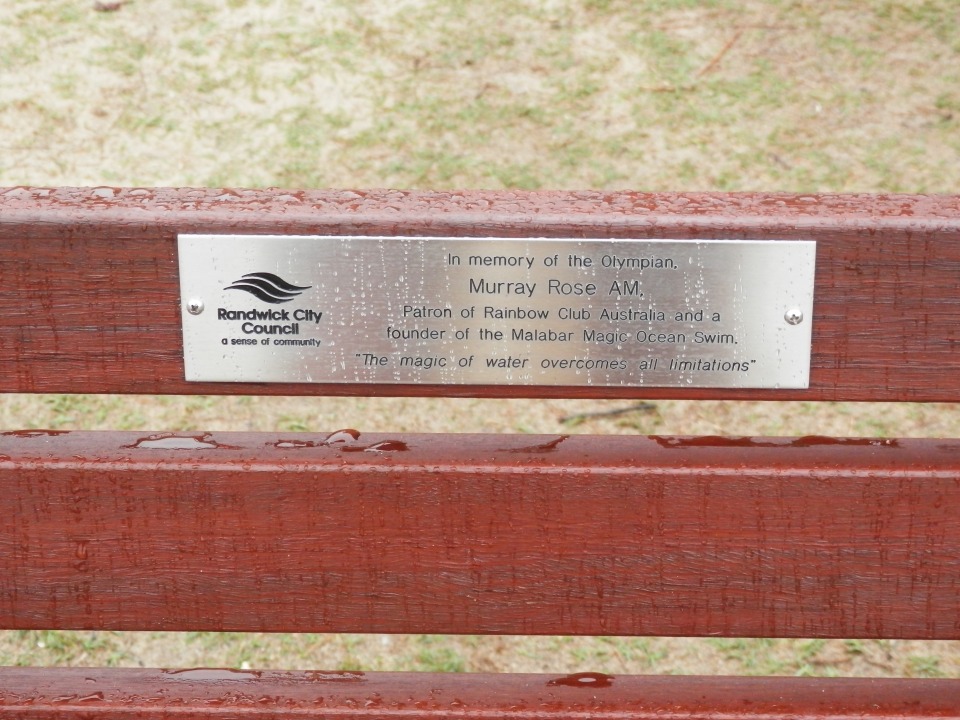 The plaque and seat dedicated to Murray Rose

Another Sunday in February in Sydney and that means another ocean swim race, and it was the turn of Malabar to host its event. This is the fourth year in a row I have competed in this event, which is one of the more pleasant Sydney swims. The swim has only been operating for six years, and was started by Murray Rose in his role as patron of the Rainbow Club. The Rainbow Club teaches disabled children how to swim, so it is a great cause to support.

Murray Rose was an Olympic swimmer for Australia, winning three gold medals at the 1956 Melbourne Games, and a gold silver and bronze at the 1960 Rome games. He was unable to compete at Tokyo in 1964 due to petty officialdom, and after attending college in the USA had a successful career in marketing and sports commentary. He returned to Australia in the 1990s, settled in Sydney and was often seen swimming at North Bondi. He died in 2012 and is fondly remembered as one of the greatest Olympians Australia has produced.

I was lucky to be present at the unveiling of the Murray Rose seat overlooking the beach on the morning of the swim.

February in Sydney is often very humid and uncomfortable, and today the clouds hung low threatening rain. Upon arrival at Malabar it is clear that the sunscreen would not be needed with the thick blanket shielding us from the worst of the UV rays greeted us last week. There was no wind, so the conditions were almost perfect.

The finishing chute and the course

Malabar beach lies in the south-eastern suburbs of Sydney in a bay called Long Bay. It used to be one of the more polluted beaches in the city due to a storm water drain that once emptied untreated at the shoreline. However, due to extensive upgrades in recent years the storm water is now pumped well out to sea after treatment, making the bay very safe. As you can see from the photo it is also quite protected from the swells that are a feature of most of the Sydney ocean beaches.

Today I had entered both swim again: the one km sprint, and the longer 2.4 km event. After my poor efforts the previous weekend at North Bondi I was hoping to make amends. This year we were able to start on the beach as the tide was approaching high at the start time.

The one km event was a lot of fun. The visibility in the water was excellent and I could see the bottom all the way round, with all the rock shelves and fish.The only issue was the small amount of leaves and wood chips floating on the water’s surface due to overnight rain. I had wanted to use the one km as a warm up for the longer event, but at the halfway mark I was doing quite well. So I pushed myself hoping to repeat my top ten age group finishes of the last two years, and my efforts were rewarded with another top ten finish. I seem to do a lot better when the conditions are smooth, letting my glide work to its maximum potential. 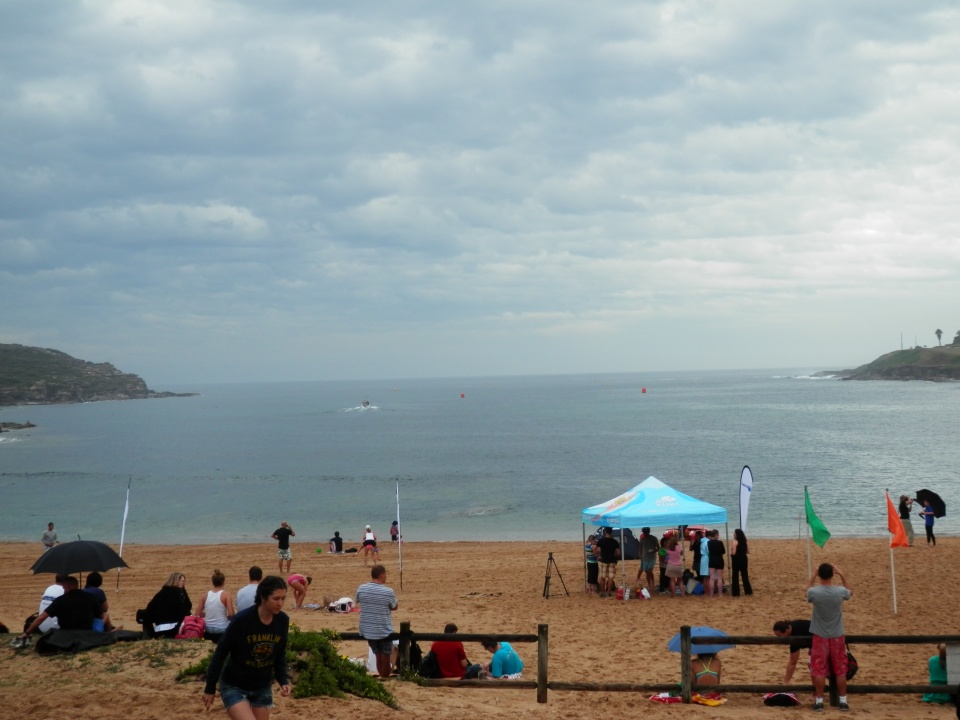 The beach and the bay

As we walked up the beach after the first race, it started to rain, and while it was nice to feel rain for the first time in a month or so, I did notice a number of fellow competitors getting cold. For me though it was refreshing.

Before long it was time for the 2.4 km event. I looked out to the head of the bay and noticed the size of the waves hitting the southern headland. This meant a nice north-east swell would push us across the head of the bay, once we turned at the halfway mark. I was looking forward to that lovely caress from the swell in the absence of any breeze.

The race started and I immediately noticed that the standard of swimmers in this race was higher. I told myself to enjoy the day with the smooth clear water, and to pace myself for the last half of the swim. One of the great features of this race is that the organisers tie a clump of large balloons to the buoy at the head of the bay, making it much easier to see, especially when there is a bit of swell running. Out we swam, and at one stage as we headed into the swell those balloons did not seem to be getting any closer. But as soon as we turned, we were whisked across the bay like kites before the wind. Once again that nice lifting and pushing feeling from a following swell was experienced.

The swim was glorious was simply glorious. I even had enough energy left to improve my speed over the last 500 metres of the swim, even if my lats started to let me know they were getting tired. A nice swim right into the shoreline, and a short run up to the finish line, and it was all over. This time I even managed a top twenty finish in my age group. A much better effort than the previous week.

But today was more about the memory of Murray Rose, and being in the presence of all those wonderful disabled athletes like Louise Sauvage (who has a Sydney ferry named after her), and James Pittar the amazing blind swimmer who has done so many of the great distance swims around the world.