This swim was scheduled for Easter Monday, but was postponed due to adverse conditions, with large swells making the swim unsafe. It was finally held towards the end of May.  Now you would think that having a swim in the last week of autumn would mean cold water. Well in Sydney you would be quite wrong as the water temperature stays above twenty degrees until June each year. Remember water takes longer to cool than the land. Likewise it takes longer to warm up at the start of summer than the land. That is why the best time for ocean swimming is from March to May each year due to the warm water, the less intense sun, the absence of blue bottles and the generally calmer winds.

By the time this swim had come around I had stepped up my training regime. I was now doing three morning sessions a week in the pool and also most weeks a session in the surf at North Bondi. I was swimming in excess of fifty km a month now, and I was also gaining confidence in the surf. Our sessions in the surf concentrated on getting in and out through the wave zone, navigating in the open water, and the starts. All of these skills were useful to pick up to a beginner like me. I was full of admiration for a couple of gents in their 60s who were still swimming very fast and could body surf extremely well. They had clearly been in the surf all of their lives.

I was still not confident enough to enter both races for this event, so once again only entered the longer event over 2.1 km. The course was a start in the centre of Bondi beach, out to a can off Bondi Icebergs, then across the bay to North Bondi, and back to the finish line in the centre of the beach. At the warm up for the squad we could see where the rip was , and where the sandbank was. Growing up on the beach I had been told to keep away from rips as they could take you out past the break. However, for an ocean swimmer there is an advantage in using the rip to get out past the wave zone for two reasons. Firstly you got there quicker, and secondly the rip reduced the size of the waves. Conversely when you were swimming back to the beach you should aim for a sand bank and not the rip.

Luckily there was not much swell on this day which I was comfortable with. At the start though there was a choice to make: should you enter the water in front of the start line and swim diagonally to the first can; or run down the beach and use the rip to get out. I decided on the latter option, even though my running was very ordinary.

I soon made it out the back, rounded the first can and headed to North Bondi. The water was warm and clear and it was so much fun swimming on a glorious sunny day.

I made it back to the beach without too much drama and feeling quite strong. I had noticed that my training had resulted in me being able to swim stronger for longer and that old tired feeling had disappeared.

It was good to share the experience with other squad members, and I felt a part of a community of swimmers. They had provided support and guidance to me. My time of just over thirty-four minutes placed me just outside the top half of the field of 500 or so swimmers.

I felt glad that I had managed to swim at Bondi when it was only a few months previously that I lacked the confidence in my skills to be able to compete. 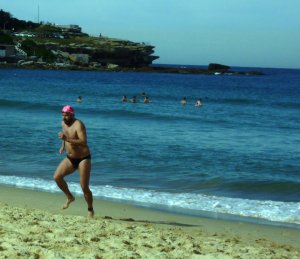