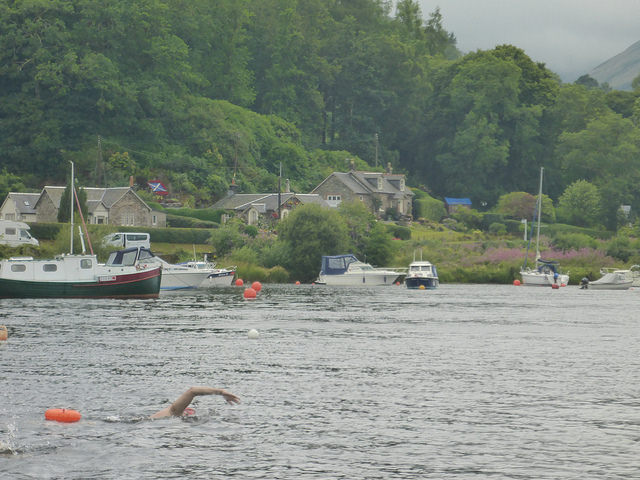 The warm waters of Loch Lomond

I am writing this blog entry during the late May bank holiday weekend in 2020. Normally at this time of year, I would be swimming as often as possible, enjoying the relative warmth of Loch Lomond as the spring sun heats it up past 10c. I used to think I would die when I first exposed myself to water of that temperature; but now I celebrate it, as I know that summer is coming. However, 2020 is the year of the great pandemic lockdown, and swimming in Scotland is not allowed at this time, unless you are lucky enough to have a waterway within walking distance of where you stay. These restrictions will be slightly eased from next Thursday though, which is a reason for celebration. So, at this time it is good to look back on my swimming in past years and write about them, enjoying the pictures and the memories.

The start of our swim at Balloch slipway

The week after the swim with Gary from Balloch to Luss, we hit the water again in Loch Lomond to swim from Balloch past Luss to Inverbeg; a distance of around 17km. Inverbeg sits on a wee peninsula virtually underneath Ben Lomond on the western shore of Loch Lomond. This part of the loch is quite open, with no islands to protect you from adverse winds, and is where the loch begins to change from a narrow highland loch to a broad lowland loch with a scattering of islands along the highland fault line.

After our swim to Luss the previous week, we were both fairly confident of making the distance. The water was still toasty warm at 19.5c, and the weather was good too, with a fine start to the day forecast, with strengthening breeze from the south and chance of some heavy showers. That breeze would push us north to Inverbeg.

Going past the golf course as the rain falls, but we could not get any wetter

Once again Gary and I did the car shuttle, leaving a car at Inverbeg, before driving back to the slipway at Balloch where we were to meet Captain Dave and First Mate Karl. We had decided that today Gary would navigate, as he was now more familiar with the various sighting points, and I would swim on his left, so that he could keep me in his eyeline. Into the warm loch we ventured at the slipway once again, once again in skins (no wetsuit). It was actually quite nice to wade into warm water: it was hard to believe this was Scotland.

Sliding past Aldochlay, I am the onoe with the tow float

We settled into our stride, up past Duck Bay, the tip of Inchmurrin, KK Bay, with feed stops every hour again. I did find that my mind went into a meditative place, while still very conscious of the direction I was swimming, and with Gary and the boat close-by too. A very serene feeling to get on a long swim, your eyes are seeing this beautiful landscape all around you, and it just tells the body to keep that rhythm going. 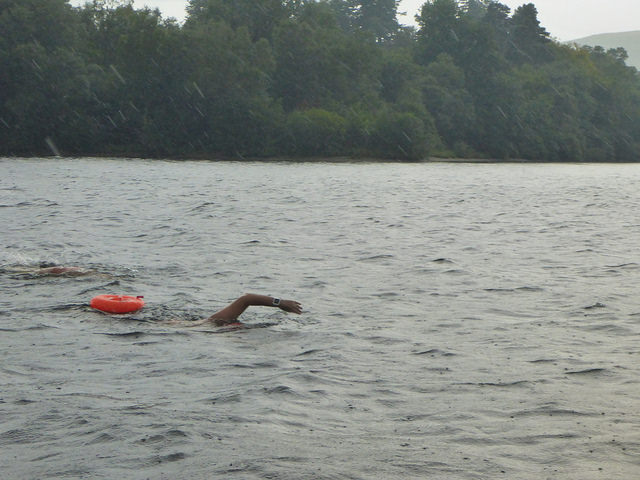 The rain did stop

Just past KK Bay as we went past Loch Lomond Golf Course, the heavens opened with heavy rain. We had to feel very sorry for our boat crew as they quickly put up the tarp, but they were almost as wet as us. We did a laugh about that at our next feed stop. But we also noticed that the wind was starting pick up from the south, which could make it very interesting as we swam past Luss. 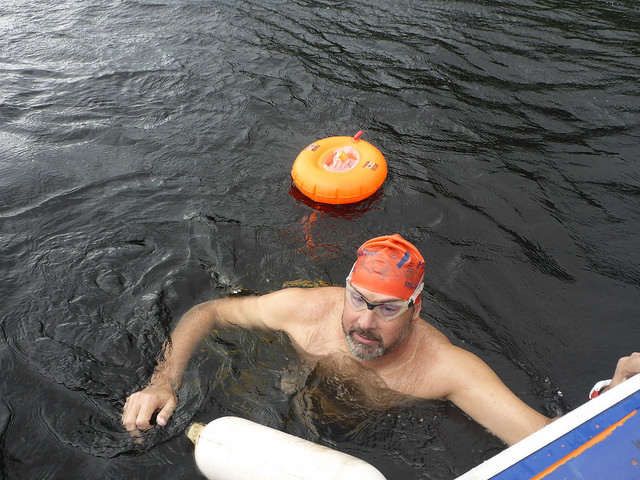 What, is it time for a feed stop already?

Fairly soon we sighted Inchtavannach and today we avoided the shallow water that delayed us last week. Up the channel pasty Aldochlay, and we were both feeling strong, and before we knew it, we had made it to Luss.

Luss in the background, the place we finished last week, but not today

I had swum the opposite direction into Luss a few years ago and ran into a steady headwind, so I knew how choppy this part of the loch could get. Well today as we swam past Luss, the wind picked up from behind us, and pretty soon we were swimming in one metre wind chop, which luckily was pushing us along quite nicely. I find swimming in a following chop is quite hard as it disrupts my stroke, as the body lifts and falls. I had decided at one point to swim to the boat to climb out, but when I looked over at them, I could see that climbing aboard would be virtually impossible. So, there was nothing to it, but to just put the head down, and try and keep Gary in sight over the waves and chop, and not stray too far from the boat. 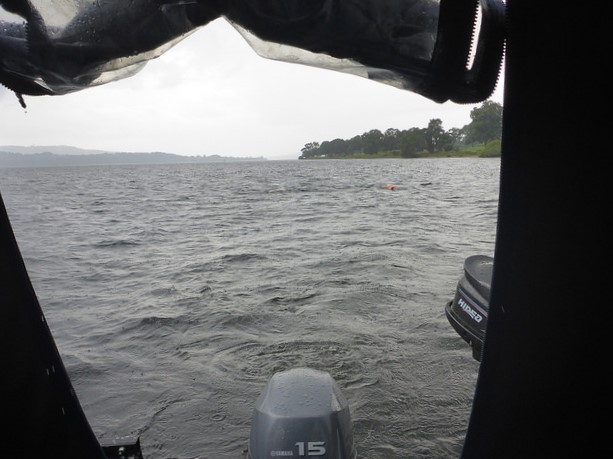 Our crew bunkered down as the rain fell

We slowly headed over towards the western shore, so that we would be able to more readily get to our exit point of a small boat harbour that would provide a modicum of protection to our trusty boat. We guided the boat into the harbour, as it is a very small entrance, and could easily be missed from the loch. We waded ashore and glanced at our watches. We had swum for just over seven hours to cover the 17.2km. We hugged each other with big smiles on our faces. This was my longest swim in terms of time and distance. We took our gear off the boat and had a very quick chat. Captain Dave was trying to talk me into keeping on going, but I declined. Sure, I felt strong and knew that I could probably make it all the way up the loch today, and that the loch would calm down on the other side of Inverbeg. But my head was focussed on only getting this far, and besides the car was waiting for us.

We made it, and note the waves in this protected wee harbour

Gary and I pushed the boat back into the loch, and waved them off, grateful for their assistance, but secretly happy that we were not onboard pushing into that headwind and chop all the way back to Balloch. We really could not have done it without them. Gary was also quite pleased as he felt more confident now about his attempt in the length of the loch in late August. 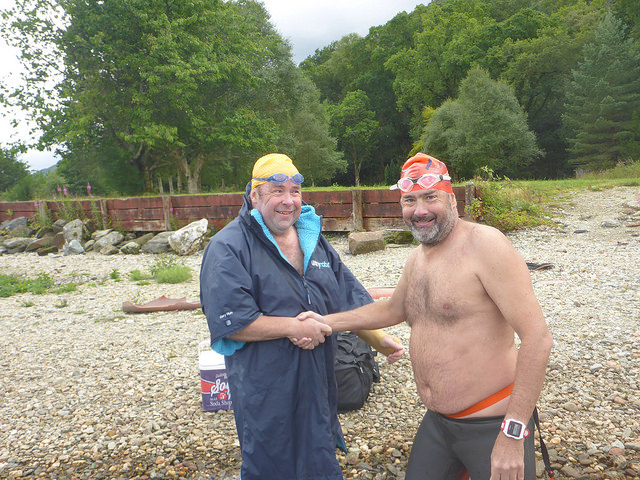 We both look quite fresh after a 17km swim