Thrilled to be Chilled Swim February 2018

Posted on December 15, 2018 By greginthewater

The placid scene at Bardowie Loch

I had noticed that an ice swimming event had been arranged at Bardowie Loch on the north side of Glasgow, to be held in February 2018. After dipping my toe in the water of an ice event at the GB Champs in Loch Lomond in February 2017, I decided to train for this event. My plan was to enter the 1km ice swim.

Now you might ask what an ice swim is? The International Ice Swimming Association requires an ice km to be swum in water of 5.0c or less wearing one pair of goggles, a cap and one pair of swimwear. They also have an ice mile distance, which requires a swimmer to cover a mile (or 1660m) under the same conditions. 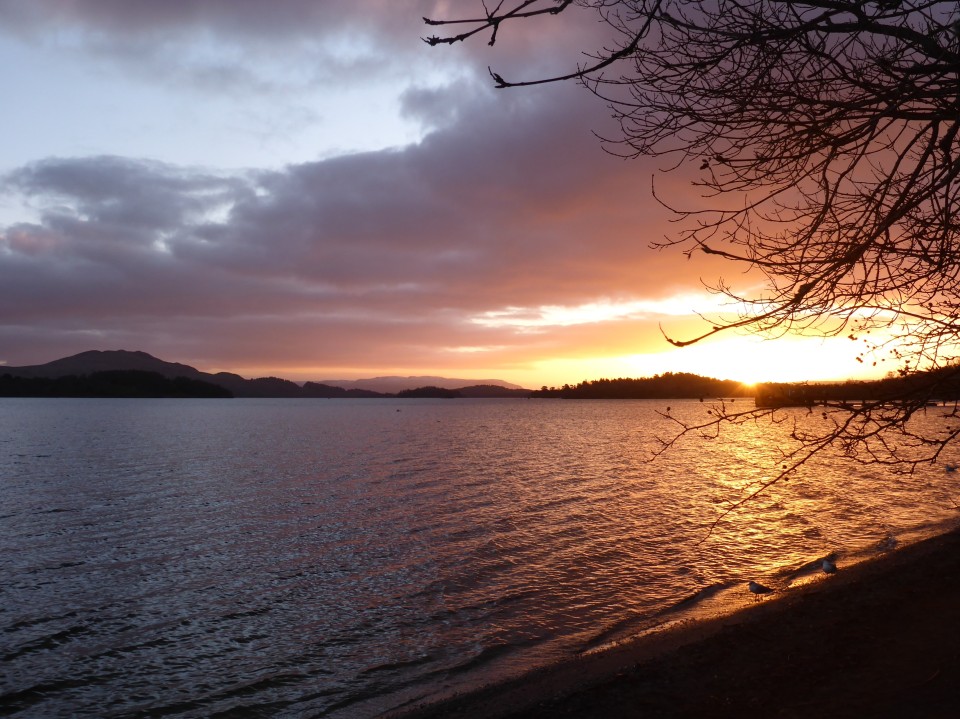 My training earlier in the winter had me swimming eight times in water under 6c over distances between 800m and 1200m. So I was quietly confident that if I could do more swims in January as the local loch waters cooled further, I would be able to swim on the day of the event. My regular swim with my buddies from Wild West Swimmers was to head to Luss on the western shores of Loch Lomond on a Saturday morning for a dip. Over the month of January I manged to get six swims in and I would try to stay in for 25 minutes or so, and swim between 1000m and 1100m, with water temperatures of between 4.5c and 5.5c.

Another idyllic sunrise at Luss, our winter swimming location on Loch Lomond

You might ask why I would choose to swim in cold water without a wetsuit, especially for someone raised in the warm sub-tropical waters of eastern Australia. For me, it was just a natural extension of a challenge to undertake in swimming. I had started swimming in open air sea baths in Australia, doing a km or so. I had swum numerous ocean races in several countries, and now having emigrated to the UK, the challenge was to swim all year. I am fortunate that I stay in Scotland, where there are so many stunning places to swim within a short drive of my home. I had spent previous winters in wetsuits, so now was the time to push myself to the next level.

Now when you enter the water, it is cold, but it is often warmer than the air. As I walk in and the water creeps up to my waist, I question my sanity and resolve. But I often visualise a warm day swimming at Bondi or Caves Beach, with warm water, and a hot sun beating down. When I started, I used to take my time to start swimming at this stage, but I realised that this couple of minutes delay meant I would miss out on some swimming time. So I would take a breath and glide down into the water and start swimming. I would feel my body feeling the shock as the cold water hits the face and chest, and the heart rate elevates. I would swim fast for around 10 to 20 strokes, taking deep breaths, and then I would force myself to get back into my regular stroke pattern. After around five minutes of swimming, I can feel the coolness in my toes as the body starts the process of moving the blood towards the core.  After around 15 minutes, I would notice that my arms would be starting to get cold as the cold seeps into the skin. Around now I start to feel that the swimming gets more difficult as the muscles work harder to keep working. By now I have usually lost all contact with my toes, as they feel like ice on the bottom of my legs. If it is really cold with a wind blowing, around the 20 minute mark the fingers get cold. At that point I head closer to shore so that if I need to exit quickly, I can stand up and will be closer to shore.

It is not always a nice sunrise, but often just grey at Luss

I usually stop around at that point and look at my watch to check the time and distance.  For winter swims, I find this is a major safety device, as it gives you direct metrics, as sometimes your mind is not as clear as it could be. I would always try to stay in as long as I could to cover up to 1100m or so, and up to 25 minutes, and would always get out while I was still thinking straight. The two hardest bits came next…squeezing the toes into the flip-flops, and unhooking the tow-float from around my waist. It was always good to have a helper to assist with this process.

Then it would be a walk back to the car, and get dressed as quickly as possible. The issue here is that despite been out of the water, the body temperature is still dropping, so it is vital to get dressed into long-johns, lined trousers, a t-shirt, a long sleeve top, a thick jumper, a big coat, a beanie, two pairs of socks, ugg boots, and if I was really cold, gloves and scarf and then sit in the car with the heater going as hot as it could go. I would also ensure I had a warm drink ready, and some snacks. It is not unusual to get the shivers and shakes several minutes after getting dressed.

The event at Bardowie was in early February, and I knew the loch would be cold. I had swum there the week before the event in water of 3.6c which was a new record low temperature for me.

Competitors in the ice mile, and this one is my fellow Aussie Nick

The day of the event dawned, and there was a real international feel to it. There were people from Ireland, Scotland, Wales, England, Italy and Australia competing in events ranging from 1 mile to 450m. It was good to catch up with my fellow Aussie Nick who I had met at the GB Champs in Loch Lomond in 2017. He was attempting the ice mile.

The day started calm and cloudy, with the water officially measured at 3.3c. I watched the ice milers go around in perfect conditions, and Nick completed it, and in the process became the first Australian to achieve this distance. I felt proud to have witnessed it, and we broke out the tim-tams to celebrate.

That is me coming third in this heat of the ice km, and note the increase in chop from the ice mile

It was soon my turn to go and I was in heat 2. My swim buddy Dave was in the first heat, and I had noticed that the wind had started to pick up, and was increasing in strength. He managed to do just under 800m before making the tough choice to withdraw. A fantastic effort anyway in conditions where the wind chill was in negative figures.

The course for the 1km was two laps of a 500m course. I must admit that I thought four laps of a smaller circuit would have been a better choice for the organisers. I knew that the toughest part of the swim would be the last 250m or so, and at that point the swimmer would be at the furthermost part of the course. Soon it was my time to enter the water, and it was cold. I was joined by tow wetsuit swimmers also trying toe do the one km distance as part of their swim targets. I wished them luck, they returned to favour.

We were off, and by now the wind was quite strong, with the first leg into the wind. Soon I was swimming by myself as the wetsuiters swam away from me. I made the first turn and the side chop made it quite bumpy, and I noticed that I was getting cold a lot quicker than I normally did in my training swims. I made the second turn and started the leg back to the starting point, with the waves coming behind. I find swimming in those conditions quite tough as it affects my body position and stroke, and I was getting very cold. All down that leg, I was having a lengthy debate about whether I thought I could make the second and last lap. It was a long debate, but as I approached the finish line, I just knew that I did not think I would be able to safely swim the second lap. I also thought that I should get out while I was thinking sensibly and logically.

Exiting the water from my swim, and you can note the redness of the skin from the exposure to the cold water and wind

Reluctantly, I indicated to the officials that I was going to withdraw. The first time I have ever not finished an open water swim event. While I was very disappointed, I also knew that I would get other opportunities to complete a recognised ice km swim. Today was not the day for me, but I would get another chance in the future.

I was also conscious of the impact of seeing me in this state had on my support crew. I resolved to keep up the swimming and try again another year to achieve my aim. The lochs will always be there, and I have to be conscious that this is an extreme sport.

A big thanks to all the supporters who showed upon the day, and well done to all those brave swimmers who made attempts to swim in these conditions. It was very tough conditions. A huge thanks to Stewart and his aquatic safety crew, you are excellent at your role and have the respect of the swimmers.