Posted on November 27, 2017 By greginthewater 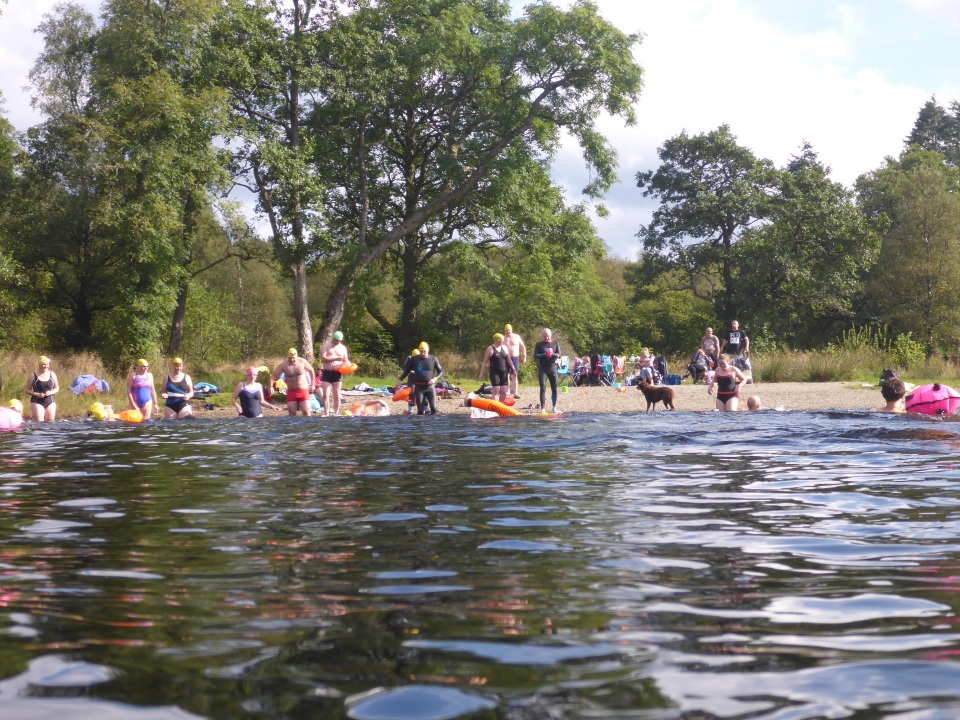 Into Loch Chon they go

The eighth loch for the day was Loch Chon, just upstream from Loch Ard. It was only a short drive, but due to recent changes to the camping rules, it took us some time to get past the rangers and down to the beach. By now it was a glorious day with a heatwave of 20c (68F) in this sheltered loch, and warm 16.2c (61.2F) water. The loch itself is located at 90m above sea level with high forested hills on the western shore.

Loch Chon looking north. We only swam to the second island and back today.

It was such a relief to have warm sun on my back as I swam my one km, feeling the water warming my chilled body. There were late season flowers blooming on the edge of one of the islands we swam past. I remember swimming in this loch in February a few years ago, with ice covering most of the loch and only a small channel to swim along. That was my first time swimming near ice, and the sounds of the ice cracking and humming as we edged along were magical. But not today. 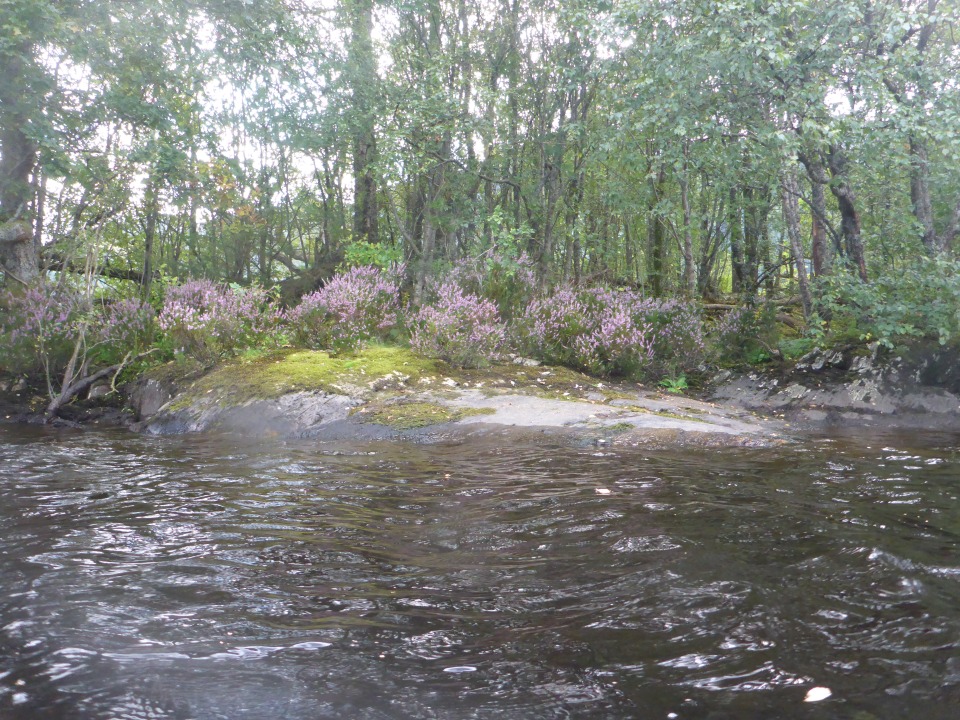 The beauty of it all

The group eager to throw themselves into Loch Chon

Off we went from Loch Chon in our convoy on the way to Loch Katrine, the ninth loch on the adventure. This loch flows into Loch Achray, and has a few steamships that ply their trade for the tourists. It is famous due to Sir Walter Scott, and his poem The Lady of the Loch, and for the book Rob Roy. It is also the main water supply for Glasgow, with swimmers only recently allowed to bathe in the pristine waters.

We had decided to enter the loch at Stronachlachar, a place we had swum from earlier in the summer. Unfortunately, today the water level was much higher, so the wee beach was not accessible, so we had to walk further around through recently cleared trees to find a safe place to get in. It was also cold, as the wind picked up, and the clouds blew in. We doubted the official taking the temperatures were entirely accurate with an air temperature of 16.4c and water of 15.9c. It really felt a few degrees lower than that, but perhaps we were chilled and tired at this time of day.

The Lady of the Lake making its way to Stronachlachar

The swim out to Factors Island was cold, with some very cold patches. We were making our way back to shore when we noticed the Lady of the Lake coming along. The tourists on board were rugged up on this windy afternoon, and they must have wondered why anyone would swim in these frigid waters either with or without wetsuits. Next time we would check the timetable to keep out of the way. 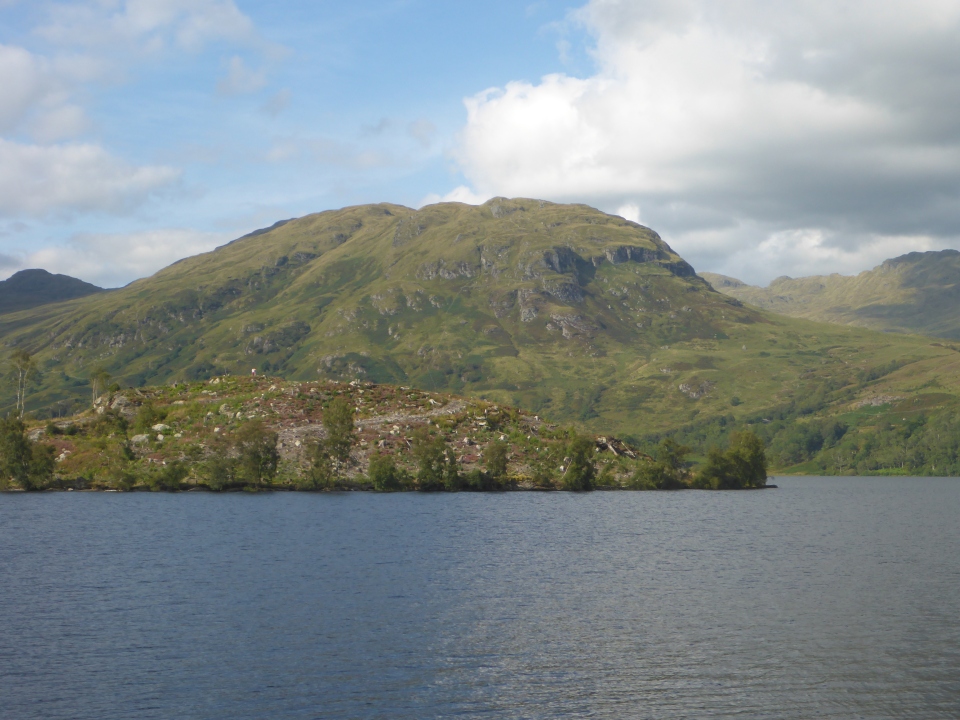 The majesty of the Highlands overlooking Loch Katrine

I was glad to get out of the loch, as for the first time today we had some wind and chop to deal with. It was clear to us that we were in The Highlands, and that summer was definitely over. I only swam 600m here, which probably meant my goal of 10km today was not achievable. I was not the only swimmer to notice the cold.

Our last swim at Inversnaid on Loch Lomond

Out last drive in wet swim gear lay ahead as we would our way from Stronachlachar to Inversnaid on the shores of Loch Lomond. this loch was to be the last, and was a fitting one to end the challenge with. It is the largest body of freshwater in the UK, and drains into the Irish Sea via River Leven and River Clyde. Every second year the BLDSA do a marathon swim race down the 35km length of the loch.

The waterfall at Inversnaid, the source of cold water for our last dip

As we assembled for one last photo the wind picked up once more, chilling us further. It was also late afternoon and any heat the sun had graced us with at Loch Chon was long gone by now. There is a waterfall that drains from Loch Arklett, and this made this one of the colder places to swim today, with the official temperature of 14.6c. It was cold going in, and I knew that I would not make up the distance I had dropped at Loch Katrine. But hey this was all about having ten swims in ten lochs on the one day, and anything else was a bonus. I did manage to get my total distance up to 9km for the day, with a tough swim into increasing chop before turning back to the waterfall and harbour to exit. 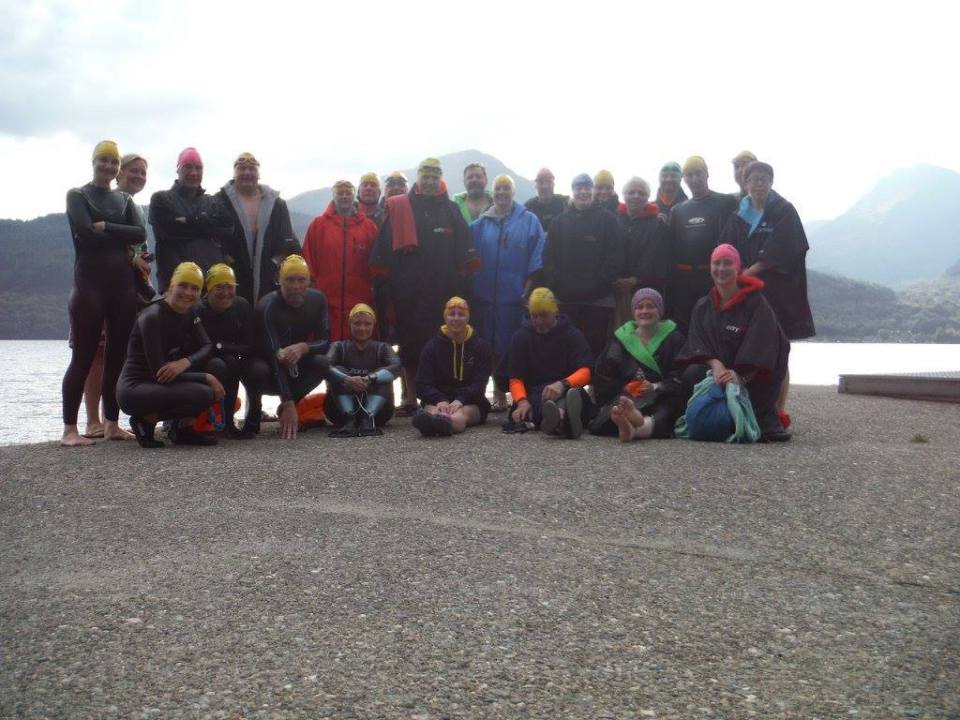 A small number of the hardier swimmers finished off the day with a shower under the waterfall. The smiles on the faces were huge as everyone reflected on the achievement. What had started out as a short conversation had morphed into a fantastic day bringing 30 swimmers together to enjoy a huge challenge. While our swim group is quite large, it is rare for so many of us to get together for a swim more than a few times a year, due to the huge range of swims on our doorstep. Today though we had celebrated our love of swimming in the outdoors, had raised money for charity, and introduced some people to our passion.

Maybe we could make this an annual event. But if we do, we might do it in July when we would have more daylight hours and could be more leisurely with our timetable, or even try to swim in more than ten lochs.

A huge thank you for each and every swimmer who took part in this day: for the drivers who swam and drove; for the people who organised and prepared the lunches; for the shaky temperature person who also organised swim caps, shirts and hoodies; and lastly for Scotland for having enough rain to fill all these bodies with fresh clear water. The day was one of the best days of swimming I had ever done, with a lot of distance, fantastic scenery, and excellent company.

We also had an article published in the October 2017 edition of Outdoor Swimmer if you can find a copy.

Media coverage of the day