Posted on September 21, 2016 By greginthewater 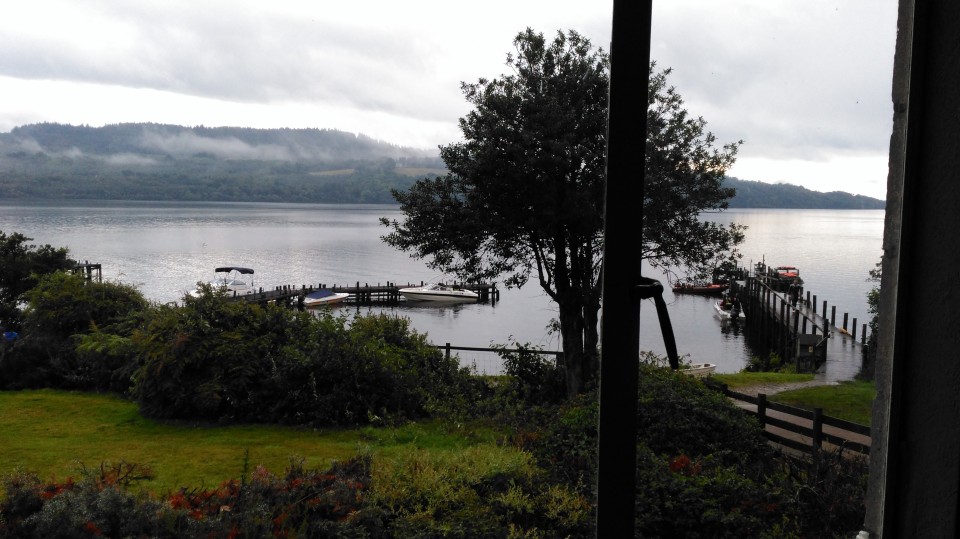 The view from the pub on Inchmurrin over Loch Lomond

I had swum in the Pier to Pub swim in 2015 and I was lucky enough to get a spot in this invitation event. The race is 2.3km event held on a mid-week evening from the western shore of Loch Lomond at Arden, to the hotel on Inchmurrin, the largest island in the loch. After you swim over, the three generations who own and operate the hotel provide dinner, and then the ferry takes you home as darkness falls. All the funds raised from the swim go to one of the local charities.

This year the weather gods were not so kind, with heavy rain falling as we drove up the motorway from Glasgow. I was going to swim without the wetsuit for this race, my first “skins” event in Scotland. I had been doing several swim sin the loch over the previous month in skins in preparation, including a delightful one hour swim from Aldochlay one evening the previous week. Now when I say delightful I mean it was a beautiful clear calm evening as the sun set and that wonderful Scottish light descended over the hills. Of course the water was quite refreshing, and each time you took a stroke the bottom of your arm and hand would enter a colder layer of water. 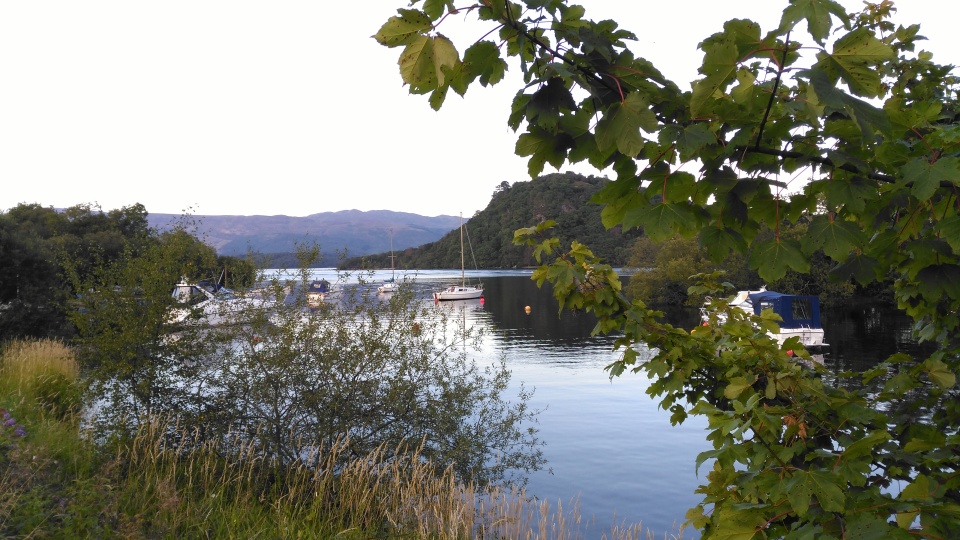 As we arrived at the starting point for the race, the rain stopped and the wind dropped. There were three males swimming in skins, and I knew both of them, having swum regularly with them over the last year or so. My aim was just to make it across, and as I entered the water I was definitely having second thoughts as I looked enviously at the rest of the field shivering in their wetsuits. 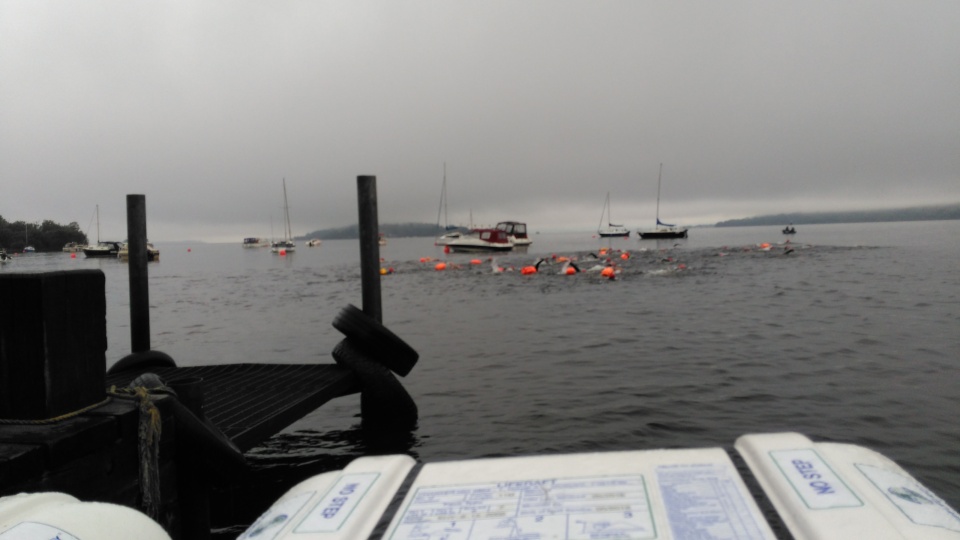 Our briefing was perfunctory: swim to the right of the moored vessels, then aim for the right hand edge of the island, swim around the point and finish on the beach between the second and third jetties. As I had done it last year, this was no issue, but Vince the van man (who was hoping to finish in the top 3) had to have the course explained to him. I stood near swim run Mark, and director Gary the other skin swimmers, trying to get warm. We started, and I went slightly faster than normal in an attempt to warm up.

We swam around the moored boats and I was behind Gary but not so close as to be accused of drafting. I settled into a nice pace and soon found that I was passing some other wetsuit swimmers, which surprised me. I looked to the right and saw the spectator fleet and safety vessels and hoped that I would not need their assistance tonight.

Some of the field soon after the start: I am on the extreme left with bare arms and a yellow float

Out past the boats e went, and Gary and I had a good speed going. But I noticed that he was not going in the direction I wanted to so I pulled up next to him, and then slowly edged in front. We were near a group of three other swimmers, and I increased my speed to get on their feet, as I thought I needed every advantage I could use. 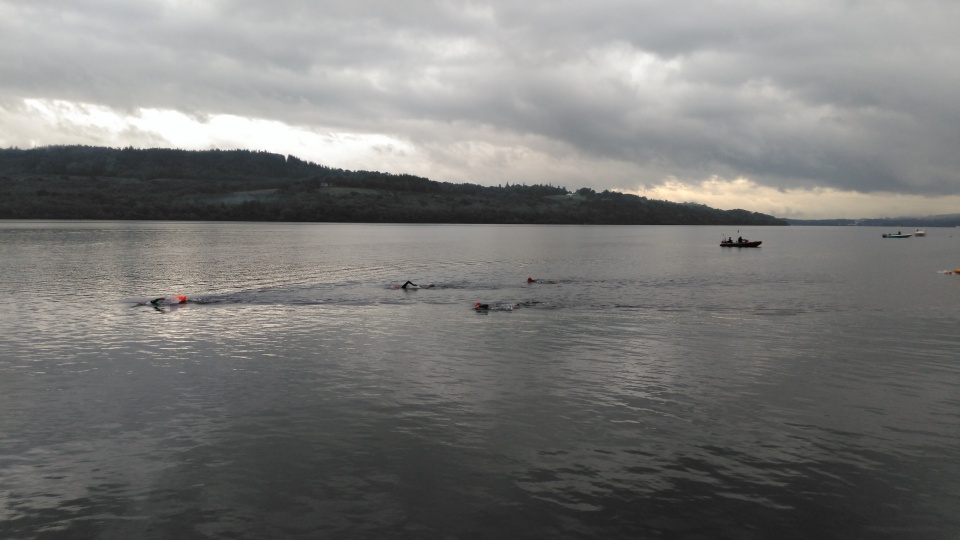 By the time we hit the island I was in front of him, and still swimming strong, though starting to feel the effect of the cold water as my fingers started to have a life of their own. I was glad I had done several swims in skins so I knew what to expect.

With 200m to go, out of the corner of my eye I noticed Gary increasing his stroke rate. I was not going to let him beat me, so I started to kick and increased my speed in response. We edged closer to the finish line, and he was not getting any closer. I swam into the shallows, stood up, and saw him 10m behind me. We gave each other a hug as we exited the water. There in front of us Vince who was third male overall.  Mark the swim run man was third skins, so a very successful event for all us.

So I had finished my first skins race of 2.3km in just over 41 minutes. Sure this was a few minutes slower than last year when I wore a wetsuit, but I was still very happy with my time. Now what will be my next skins event?

Once again a huge thank you to the hotel owners who put on an amazing event with lots of prizes for the swimmers, good food and a beautiful location. I hope to be back in 2017 to do this for the third time. I am lucky to live in this part of Scotland so close to so many incredibly beautiful places to swim. 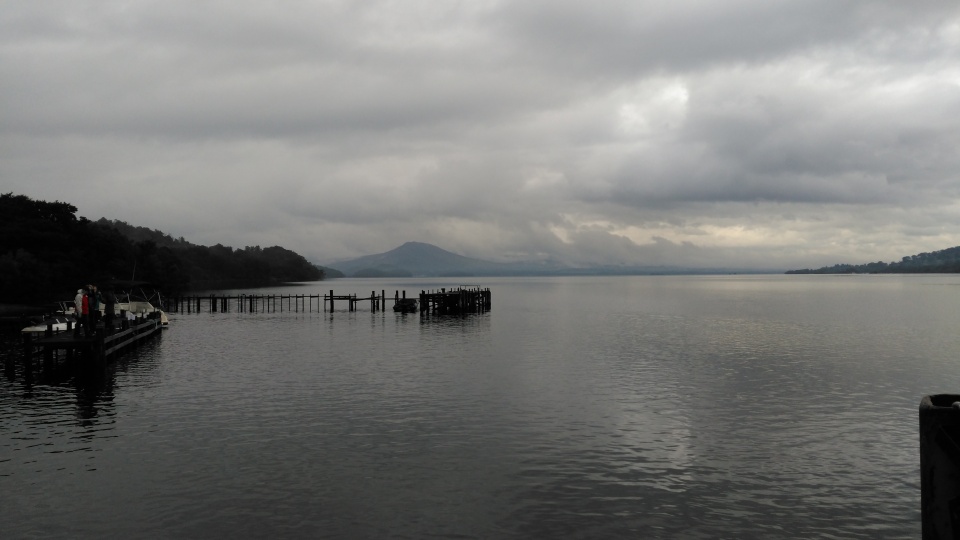 A view towards Conic Hill from Inchmurrin