Posted on July 3, 2016 By greginthewater 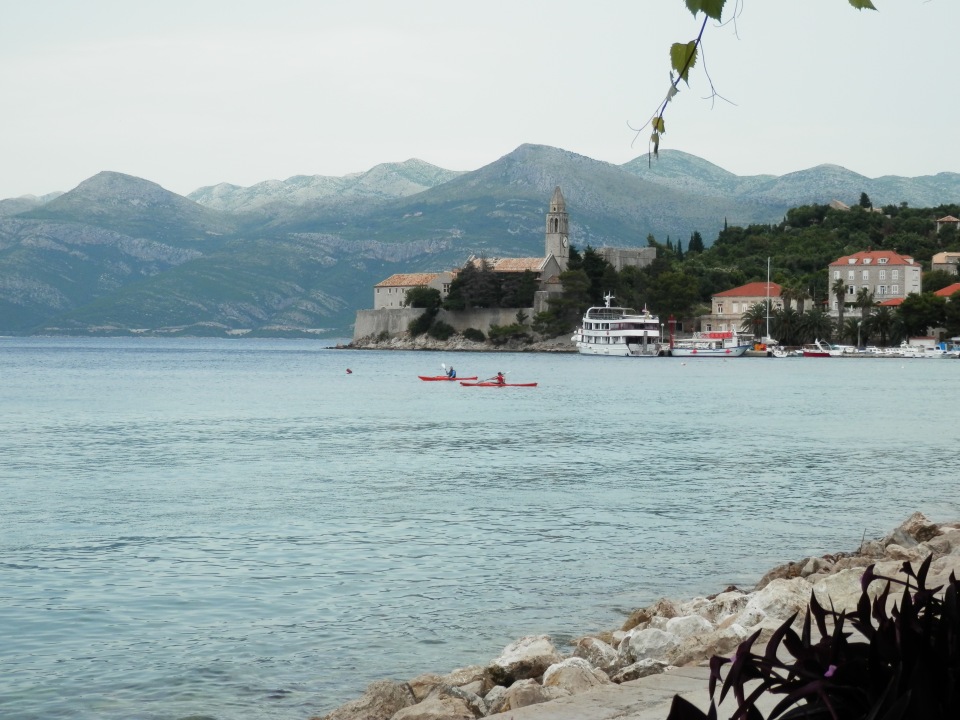 The village of Lopud in southern Croatia

I had made arrangements to return to Prvic Luka for some more swimming in the Adriatic Sea. However, before going there, we decided to visit the city of Dubrovnik in southern Croatia. Dubrovnik is a city that still has its old town that draws visitors from around the globe. It is so stunning that it is used in movies such as the Star Wars series, as well as the setting for Kings Landing in the Game of Thrones saga. It was my first visit to the city, and I have to say it really is as amazing as all the pictures show. We spent time in the city, but found that it was very crowded during the day as the the cruise ships that arrived in the town each day dumped their loads. Once these ships left each afternoon (and there were at least three to four ships in port each day we were there), the old town became quieter. It was fascinating to wander around the alleys and walls and soak up the atmosphere of this special place.

We also managed to get across to a rare sandy beach at Sunj Bay on the island of Lopud. It was a pleasant 55 minute ferry ride to the island. I was rewarded with a short swim and body surf (the first in over two years) at the beach punching into the chop generated by the un-seasonal onshore breeze that blew in from the south. This did make the ferry trip back to Dubrovnik a tad bouncy with some two metre swells in the channels between the islands in the chain. I also managed to have a nice swim in Lapad Bay one afternoon. 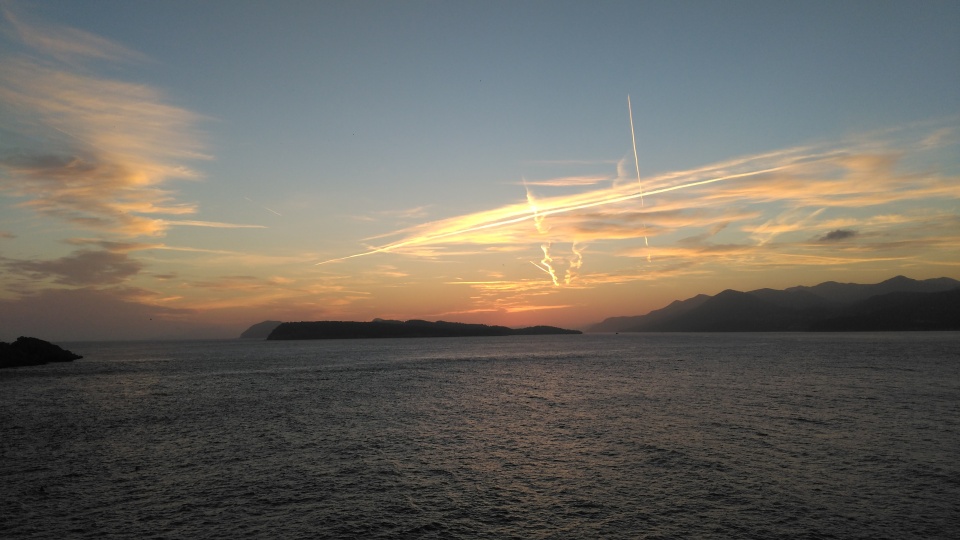 A sunset view towards Kolocep and Lopud

After a few days in Dubrovnik, I boarded a bus to Sibenik. This journey which took 7 hours is one of the most amazing roads I have ever been on as it follows the twist and turns of the coast north to Split and then Sibenik. I had chosen the slow bus on purpose to allow me to see more of the country, and I was glued to the window most of the way watching the towering peaks meeting the Adriatic in a never-ending vista of awe. There were numerous times I wished that I was driving myself so that I could stop in a little village and go for a swim. All those islands, all that history, and all that beauty. I will have to try to get back there again and explore in more detail.

Just another view on the road between Dubrovnik and Split

After getting off the bus in Sibenik, I waited for the ferry that would take 40 minutes to get to Prvic Luka. This was the first time I had returned to the island since 2014, and I was looking forward to catching up with all the locals that welcomed me in previous years. I was hoping to get lots of swimming during the six days in preparation for a 10km swim in Scotland in mid July.

Upon arrival I was greeted with affection by Filip at the hotel, and also Dado, one of the best waiters I have seen. It was great to see them again, and catch up on the news of this very special place. They did tell me I had 45 minutes to prepare for the safety briefing and acclimitisation swim. As I sat at the briefing I wondered what the week would bring with a total of 15 swimmers from the UK, Canada, US (East Coast and West Coast), and Australia, ably led by Kelly and Pip.

This was my first trip where I was able to swim in the morning and afternoon for five days straight. I was hopeful that I would cope with the distances and pace set by my fellow swimmers. I was also keen to swim in just my swimming costume once again, and to also use the tinted goggles for the first time. On the first day, we did a nice swim along Zmajan, and an afternoon swim along Prvic Luka for a total of just over 5.5 km. The second day we sailed south to get out of the wind, and we did 6.6km for the day. Day three and by now I had worked out that I was slower at the start then the rest of my group, but after  twenty minutes or so, I would start to catch them, and then sometimes even slowly pass them, before joining one or two others to swim a final 800m or so. On day three we did a gorgeous three island loop into Kaprije in the morning, and another coastal in the afternoon for a total of 6.7 km.

Some of the islands near Prvic Luka, with Zlarin the hilly island int he background

By day four I was enjoying swimming with my group, as we mostly swam very close together at a similar pace. Most of the time the six of us were within 50m or so of each other, and it was always good to have someone near you. Day four brought our first crossing to the island of Zlarin. I told the guides that I would escort four or five of the slower  pink group on this 3km crossing, which featured a navigation marker on a reef at the half way point. I gathered my group around me and told them that I would go straight to the marker and that they should stick on my feet the whole way. I also had Jamie from my group to act as sheepdog in case any of them went of course. I told them the first stop for drinks would be after a mile or so at the marker.

Well this was one of the most enjoyable swims I have done for a long time. I set out at a steady pace, and whenever I looked over my shoulder, all I could see was the five pink caps and Jamie right behind me in a line. It looked like a mother duck taking its ducklings for a paddle. When we started, there was no wind, but as was typical for this time of year, a light breeze came in as we swam, creating a small chop. I had used Zlarin as a sighting point for the marker, and after half an hour of swimming we had made it there. We had our drink, and then talked about the next leg to Zlarin. Once again I was in the lead, and this time was tougher as the chop increased from our left, and the current pushed us to the right. But the ducklings hung in there, and we all made it across. The group was so overjoyed that they had swum that far, as I am sure some of them had never swum that far before. I felt proud that I was able to help them achieve their goal.

Day five and we did another tough crossing, this time from Kakan to Zirje, before a nice coastal swim around the top of Kakan in the afternoon.

All up during the week I had swum just over 30km in the six days of swimming, and while I was tired, I was happy to have achieved that much. At the start of the week I would have been happy with 20km, or maybe 25, so to get to 30km was huge.

But the most important thing about a week like this is the opportunity to meet people from around the world and find out about them, as they share their love of open-water swimming, in a place that is made for swimming. It does not matter what way the wind blows, there is always somewhere that you can get into the water. 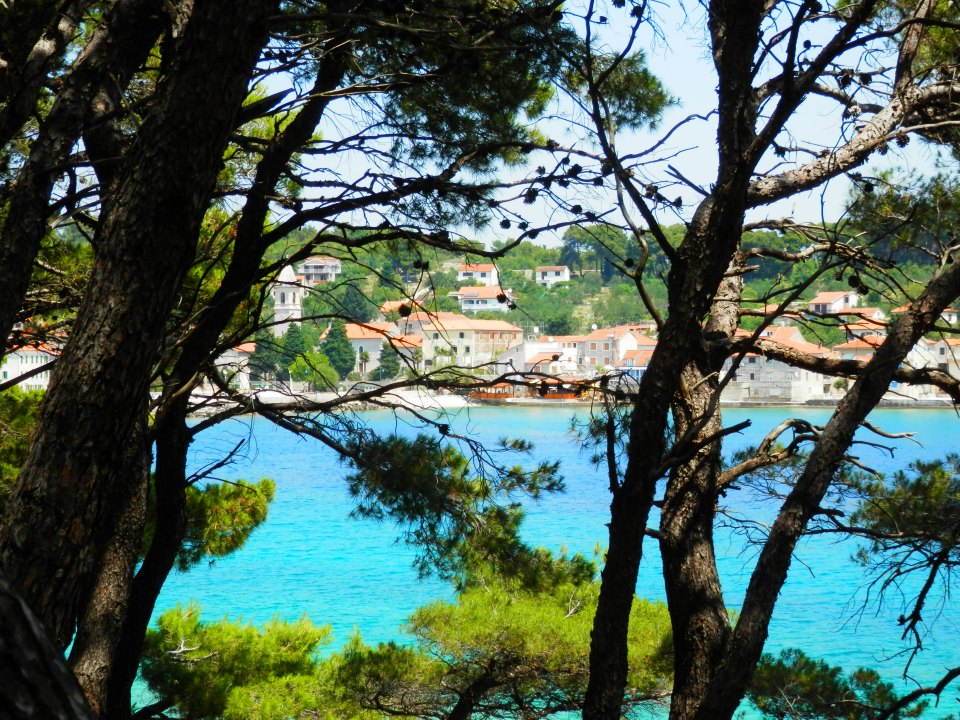 Prvic Luka through the trees

It is not only the people on the trip that this week special. Yes the guides were their usual very high standard, and yes the others on the trip were nice folks as well. But it was the locals who welcomed me back into their world like a  member of their family that I will always remember. I am already thinking about my next visit.

This last photo was taken by Jamie and it features the Strawberry Moon rising as the sun sets. The Strawberry Moon is when the full moon falls on the summer solstice., which happened in 2016 for the first time since 1967. This is a great photo, so thanks Jamie for letting me us it.