Each year I post a summary of my swim events, but this year it is different. I used to write it at the end of May each year, as that was the end of the open water swim season in Australia, and it would cover the 12 months to the end of May. Well, this year I am writing it at the end of May, but it is now covers a different time period. As I have re-located to the UK, I thought my season would now cover a calendar year: so this report is a summary of my swim events and other notable swims for the 12 months ended 31 December 2015.

For 2015 I swam at seven events, doing nine races over distances ranging from 800m to 5000m. My first swim was at Milarrochy Bay on the eastern shores of Loch Lomond in Scotland. While the setting was stunning, with walkers doing the West Highland Way meandering past, it was probably the toughest swim I had done for a long time. The water was quite cold for me at 11.5c, and I struggled to finish the two km course, with only three swimmers finishing behind me.

Swimmers entering the water at Milarrochy Bay in Loch Lomond

My next swim was at the aptly named Beastie swim at Balloch Castle on the shores of Loch Lomond in Scotland. As I had not undertaken much training, I entered the 800m race, and surprised myself by coming a close third on a blustery day with plenty of chop running across the course.

My third event was at Coniston Water in the Lakes District in Cumbria in north-west England. I had managed to get some training done, so I entered the one mile race (1600m). There was a large field of 276 in three waves, and I managed a top 60 finish and 5th in my age group, but more importantly, swam a good time. This was my first visit to the Lakes District and it is quite beautiful with its narrow roads, little villages perched on the edges of the several lakes, the tallest hills in England overlooking them all, and lots and lots of visitors.

The waves lined up for the deep water start at Coniston

Nine days after the Coniston swim, I took part in my favourite swim of the season: the Pier to Pub swim on Loch Lomond in Scotland. This was a 2300m swim from Arden to the pub at Inchmurrin one of the largest islands in Loch Lomond. It was a stunning early evening with lots of sun, and not much wind for this boutique event. The swim finishes with a bagpiper on the jetty at the pub, where a meal is served. After the presentations, you get the ferry back to the mainland as darkness slips over the loch. I managed a credible 7th in this race. 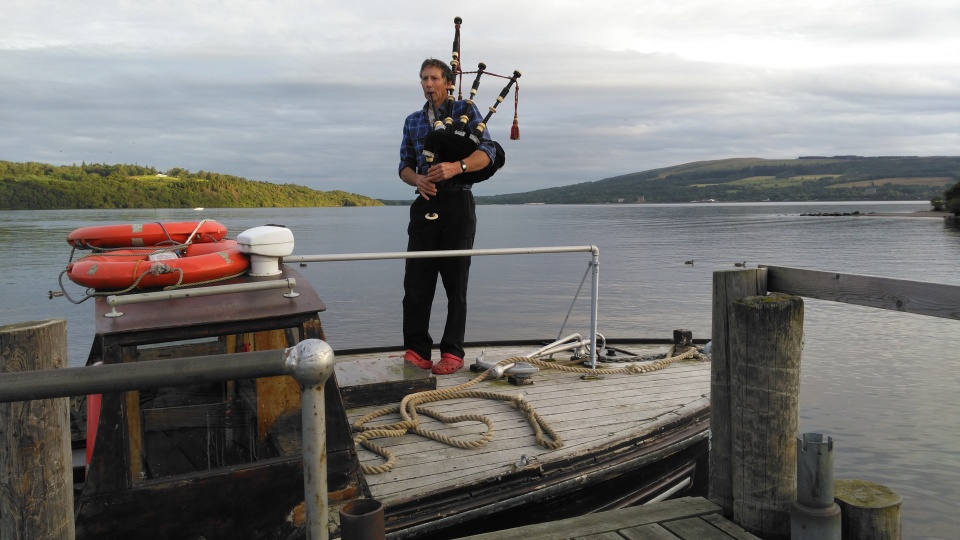 The welcome to the island of Inchmurrin

Four days after the fantastic Pier to Pub race, it was time for the biggest swim on the Scottish circuit, the Great Scottish Swim, held at Balloch on Loch Lomond in Scotland. This is part of the great race series held in the UK with a few thousand competitors in races from half a mile to 5000 metres. I had entered the two mile race (3200m), and came in the top 120 out of 470 swimmers. It was great to see so many people taking part in the day, with lots of people raising funds for their favourite charity.

A week after the Great Scottish Swim, it was the turn of Loch Ard in the Trossachs in the Scottish Highlands to host a series of races from one km to 10km. I entered the 5km race and despite almost losing count on the five laps, came third overall. The day was almost perfect for swimming with the race starting in smooth conditions, which only started to change towards the end.

My last event for the season was at Loch Ken in Dumfries and Galloway in southern Scotland. The event had races over one km, two kms, and four kms, and I became the first person to enter all three races. The day was windy and wet, and I even doubted whether the event would be held; but these Scots are a hardy lot, and it went ahead. They even had a film crew there as a reporter from the local current affairs show was swimming. I did quite well on the day, coming third in the 1000m, fourth in the 2000m, and sixth in the 4000m events. I was quite tired by the end of it, but very pleased with the results.

A view of the course at Loch Ken

In summary, nine races, taking my overall tally to 84 races, with six top ten overall placings: my best ever results in terms of top ten finishes in a season.

But the season was also about wild swimming, with lots of swims undertaken on weekends, early morning and late afternoon in the long summer hours of light in Scotland. In fact in the month of August, I even swam further than I had ever swum in one month, with just under 70kms swum, all outdoors.

In no particular order some of the highlights were:-

But the highlight of the season of course would be the swim down the length of Loch Rannoch, a distance of ten miles or 16 kms. This was by far the longest swim I had ever undertaken, and it was fantastic to do it in the company of a great group of swimmers and supporters. We started in fog, swam in sunshine, then cloud, then wind, and finished in just under six hours in cold water. A huge effort from everyone. 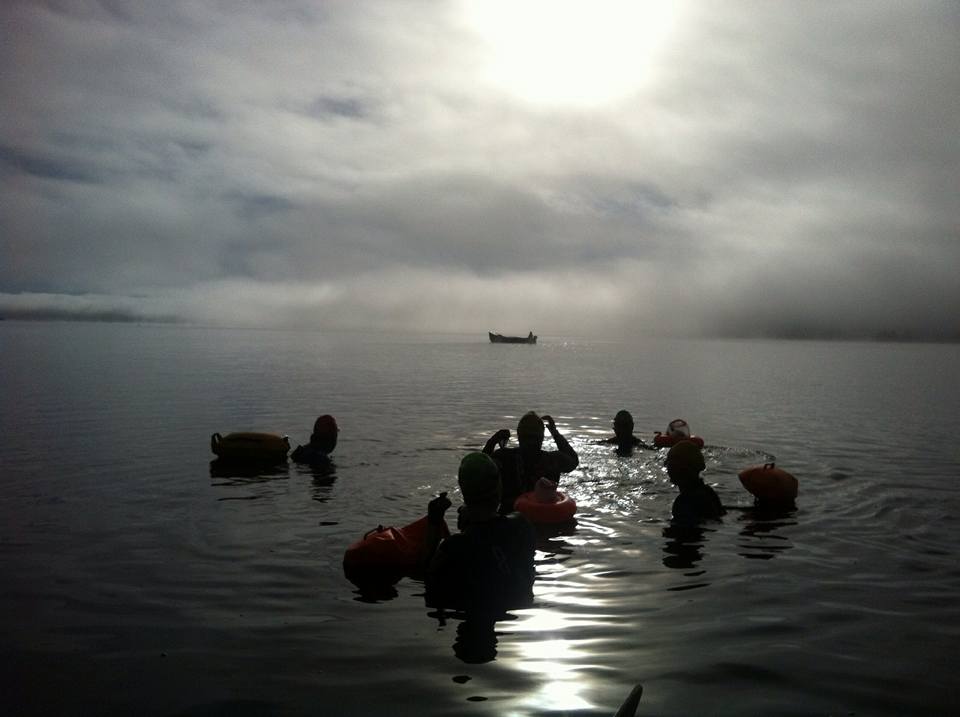 So a good year of events, and exploring Scotland and its lochs. Now for 2016.