Posted on November 24, 2013 By greginthewater

A view of Toowoon Bay

I had tried to do the swim at Toowoon Bay in 2011, but the event was cancelled due to strong winds. I was nervously watching the weather forecast all week for Saturday as the week had been wet and stormy again. I decided to enter the race and hoped it would be on. One of the great things about this swim is that there were three swims on offer: a 400m swim, a one km race, and the big one the two km event. I entered all three knowing that it would be my last swim until late January.

Toowoon Bay is a gorgeous little cove on the Central Coast of NSW, just south of The Entrance, and about a ninety minute drive north from Sydney. The weather forecast on the morning of the swim was the chance of a light shower, and a late thunderstorm, with light winds. Excellent, it would be one as I drove up from Sydney through the fog. I always like driving through early morning fog, it means that the wind is light, and the conditions should be good.

View from the beach looking south

I arrived at the beach and went through the registration process. The club was using electronic timing, which meant a different chip for each of my three races, and a different number. We had our number written on our left arm, and right leg. The conditions looked good, with no breaks, and only a small shore break. High tide was not until the middle of the day, and the swell coming through the head of the cove was quite small. There were black storm clouds further north up the coast, but I thought they would not bother us today.

I caught up the usual suspects who like me are swimming tragics and will go anywhere it seems for a swim in the ocean.We found a place in the shade, as the sun when it broke from behind the clouds was quite strong. 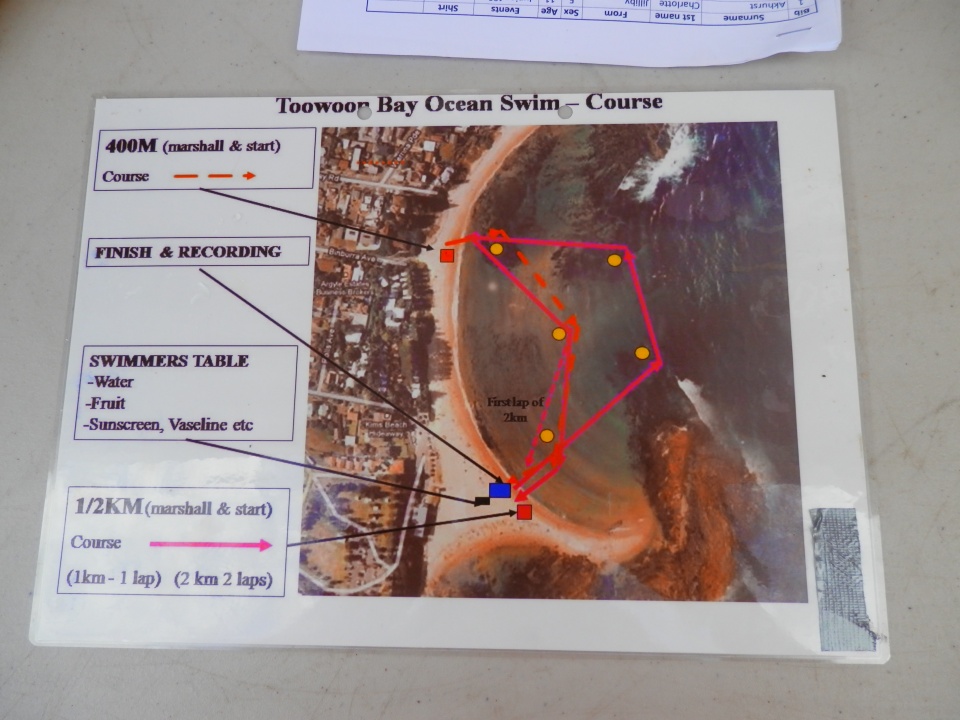 Course map for the three swims

The 400m swim was the first swim for the day. We all walked down the beach to the start line, past the stunning Kims Resort, with the guests sitting down to breakfast. I have heard from people who have stayed there that the meals are excellent and generous in their servings. The 400m race was split into two start times with the open event first, followed by the junior event. There was only around 50 in the open race, and I was surprised when we were told there would be two waves, one for the men, followed by the ladies.  It seemed that we were all on first name basis as we lined up for the start. The course would be out to the first yellow marker about 30m off the beach, then turn right and head towards the finish line.

A short blast of the whistle and we were off, pretending that we had the energy of the juniors that would follow later. There was a gentle swell, no break, and I enjoyed the chance to warm up the rest of the days activities. The water was never very deep, and it was enjoyable stroking through the water, passing other swimmers. I even managed to run up the beach across the finish line, in a very respectable time, that was good enough for 10th place for the men, and 16th overall. A nice way to start the day. 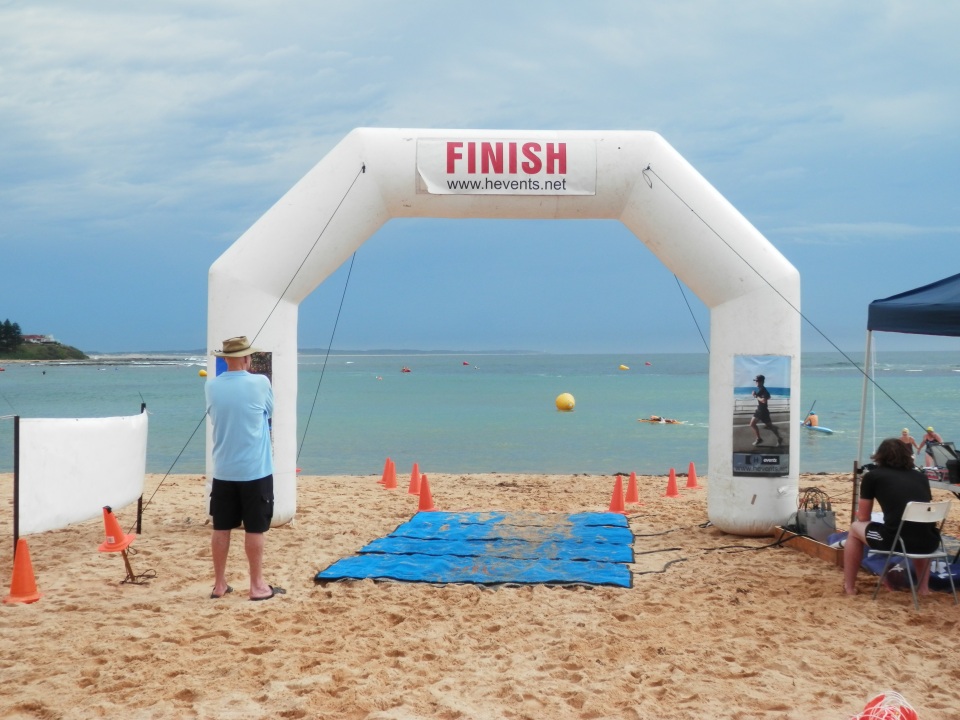 View of the course through the finish line

I went and refreshed and ate some food for the one km race that was scheduled for an hour’s time. This course meant starting at the finish line, swimming out to the head of the cove, across it and down to the start line of the 400m, and back to the finish line. Once again the men and women were separated for the start, despite there only being 130 competitors. By the time were gathering, the tide had come in further, and the wind had picked up. It looked like the swim out to the head of the cove would be straight into the wind and swell.

The race started, and by now the sun had disappeared behind the clouds, which meant that sun glare was not to be a problem. Out through the weed we swum, into the swell which at times faught you for forward progress. All I could think of was this would be tough on the two km swim which was around the same course twice. Finally I made it to the head of the cove, and turned across the swells, making it easier to swim. Around the next mark, and now the waves were pushing you to shore, good fun as long as you could see the marker buoy on the beach which had blown over. Always fun navigating in a small chop and swell. Luckily I had sighted a clump of trees on the hill behind, so I kept a straight line.

Around the buoy close to the beach and there was only 400m to go now. I took it easy, conserving my energy for the next race. I came towards the finish line, and noticed another swimmer just ahead of me. I tried to catch him, and on the run up the beach we crossed the line together. It was good to grab some fruit and water and prepare for the next race. I also noticed that none of the ladies wave had passed me. My time was good enough for 7th in my age group. Not a bad day so far.

But little did I know at that stage what mother nature would bring. The club decided to hold the presentation for the 400m and one km races once the one km race had finished. By the time they had finished, we could see lightning, and hear lots of thunder. The skies grew darker and darker, and the wind started picking up. Would we be able to swim the final race?

It started to rain, and so we waited twenty minutes hoping that the storm would blow over. But alas, the thunder grew louder, the clouds grew darker, and the rain started to fall heavier and heavier. It seemed inevitable that we would not get in again. And so it proved to be. The final race was cancelled due to the storm as the beach was closed and the club took the flags off the beach. What a shame, I was looking forward to doing three races on the one day for the first time ever. That would have to wait for another day now. The club announced that the bbq would now be free for all swimmers who had stayed.  Good effort.

As I drove back to Sydney through the rain, I felt sorry for the surf club. Once again, the event had been disrupted by the weather.