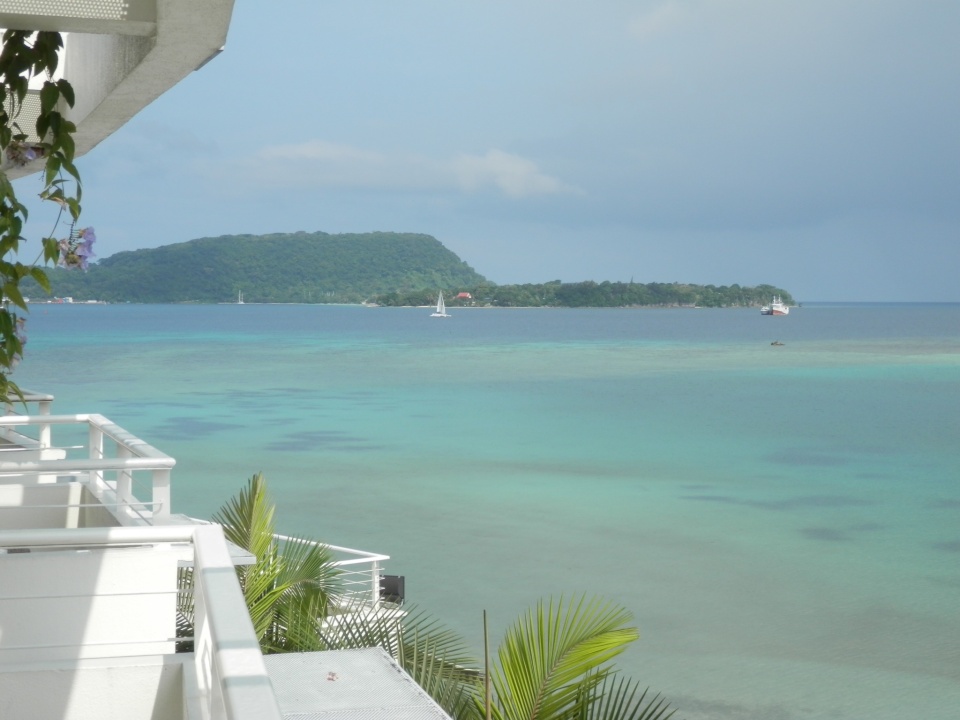 I was in Port Vila the capital of Vanuatu as part of my prize in the NSW Fine Oceanswim series. Luckily for me the winner had chosen the trip to Fiji as his prize (thanks Rohan), which left the Vanuatu trip for the random prize winner amongst the eligible top 20 finishers in the series.

I flew out of Sydney on the Wednesday evening flight, and after a short three-hour flight, landed in Port Vila. All that I knew about Vanuatu was that it used to be called the New Hebrides and was a nation comprising about 80 islands. It used to be jointly administered by Great Britain and France, and as a result had English and French as official languages. It was also a large naval base in the second world war for the Allied Forces, and was the setting for South Pacific written by James Michener. I really did not know what to expect in on arrival.

There were a few familiar faces on the plane from the South Curl Curl swim. There were about 75 swimmers travelling from Australia for the swims in Vanuatu and a large number of them were on the flight. We left Sydney on a cool winters day, and arrived in Port Vila in the tropics.

Thursday was free time for us all, so after breakfast I wandered around Port Vila, and had a look at Iririki Island, the scene of the swim. Swim registration was Thursday afternoon, so I caught the ferry over to the island and registered, getting my identification and t-shirt. We were told the swim would start at 10am on Saturday, with final registration from about 8.30 am.

On the way back to my hotel, I caught up with a group of swimmers from Murwillimbah and had a nice dinner of local beef with them all.

Friday was a tour to the village of Mangaliliu about a half hour drive from Port Vila on the western side of the island, and the scene of several Survivor series. A swim along the reef had been arranged for us. On our mini-bus I met more people from the tour party and we all chatted about our swimming histories.

Some of the fish and coral

As we drove down to the village I was struck by the beauty of the location, with smooth water, and lots of greenery. We were given a briefing about the swim from one of the local masters swimmers, and he told us to be very careful entering the water to avoid getting scratched by the coral, but if we did treatment was available. We swam over some giant clams that the village is restocking, and then over to the edge of the reef. The water was crystal clear and it was no trouble to see all the way to the bottom twenty metres below. A few of us saw a turtle gliding by, and there were lots and lots of fish. It was an absolute joy to swim in such warm clear water, and I did not feel any effort in gliding over to the point and back. Unfortunately I managed to scratch myself on some coral coming back to shore, but I received suitable treatment. Then to our surprise the village gave us a feast of wonderful food. What an amazing day.

So Saturday morning arrived, and it was overcast with the odd shower, completely different to the day before. Upon arrival we were tagged with marker pen and we studied the course map. The course was a clockwise circumnavigation of Iririki Island, a distance of 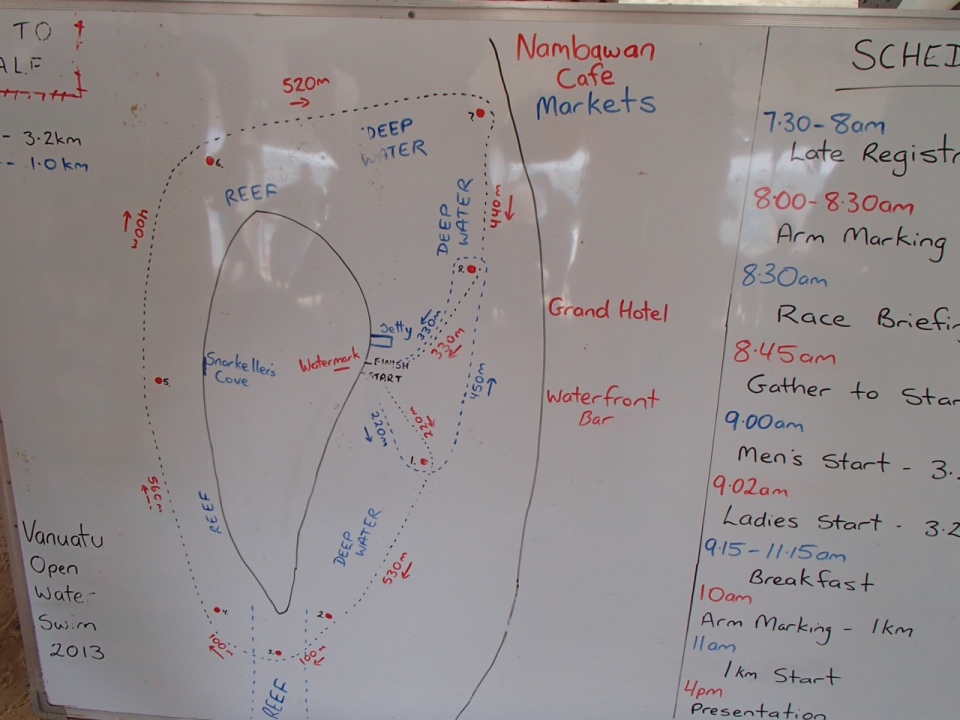 3.2 km. We were told to be aware of the sea urchins growing in the shallow water at the southern side of the island, but that the buoys should steer us well away from that area. There was also an in the water start with men starting at 10 am, and the women two minutes later.

The men entered the warm water and I stuck to the rear. The gun went and we were off to the first buoy just near some moored yachts. I swam steadily, as I knew that a lot of swimmers would go fast at the start and then fade. I was also conscious that this was going to be my longest swim since Governors Island in New York in July last year, and I wanted to save my energy for the last portion of the race.

Around the first buoy and I was enjoying myself swimming in the tropics in water in the high twenties. Around the second buoy, and time to look for the third buoy. But where was it? I learnt later that it had drifted off course, and before I knew it I was swimming over the shallow reef at the southern end of the island. As I was thinking of the warning about the sea-urchins I looked down to see a forest of them with their long spines reaching up ready to caress us. It was daunting, but soon I was clear of them.

Around the back of the island, and I had to stop to readjust my silicon cap, costing me some time. By this time the faster women had started to pass me, and I managed to briefly get on their toes. As I turned to cross the channel back to the ‘mainland’, I was swimming with a group of three or four swimmers. I had trouble sighting the turning buoy, but I knew it was near the markets and they were easy to spot. Swimming across the channel was the toughest part of the swim as we were swimming into the wind and a small chop.

Finally turned the buoy, and turned for home, but once again had to stop to re-adjust my cap. This time I removed it and stuck it down my swimmers. 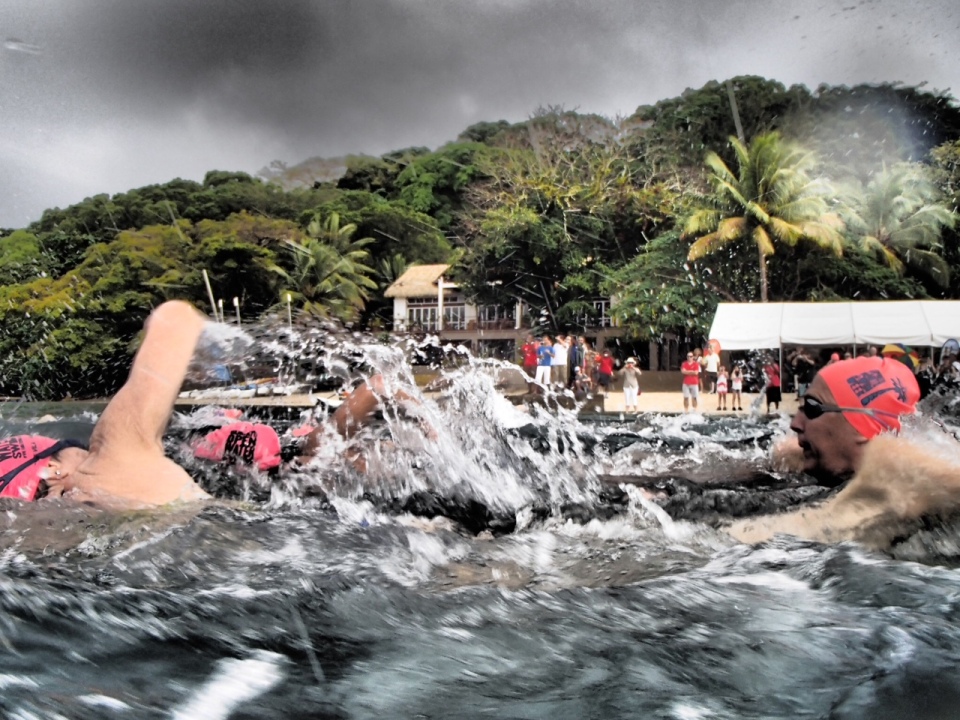 The start of the race

The finish line was on the beach near the start line, and it was easy to spot. By this time I had enough energy left to swim faster and make sure my stroke was working well. I ran out of the water and crossed the line. My time was just over one hour, which I was happy with and was close to my target. I finished in the top ten of my age group, so not a bad effort.

We had a nice presentation dinner that night, and it was sad to say good-bye to so many new friends who would not be going onto Santo on Sunday. A big thank-you for the photos Rosie, after a malfunction with mine.

I had enjoyed my swim in Port Vila, and was looking forward to the next stage on the adventure.