Looking back towards the start line

The last weekend of April, and there were three swims scheduled in Sydney: the Shark Island swim at Cronulla; the Warriewood swim; and the South Curl Curl swim. All of these were attractive, but I chose the Curl Curl swim, as I had heard excellent reports of it from other swimmers. The swim over a two km course starts at South Curl Curl and swims south along the cliffs down to Freshwater Beach (the scene of the swim I did on Good Friday).  Last year this race was hampered by testing conditions, but the forecast for the day was for excellent conditions. All week the weather had been warm and sunny with no swell and light winds.

I parked the car near Freshwater beach, and walked along the cliff top path to South Curl Curl. This gave me a chance to examine the finish line conditions as well as the rest of the course. By the time I had walked to South Curl Curl, the sun was beating down despite it being the end of April.

I arrived at the clubhouse and went through the familiar registration process: find the table for your age group, state your name, get a number written on your arm, and get the coloured cap. Once again my age group was given pink caps, it seems to happen more often than not. You will note there was no timing chip. As I registered, the man in front of me congratulated me for winning the swim holiday to Vanuatu.

Lining up on the start line

Yes I had found out that morning that I had won a swim trip to the South Pacific in June thanks to the Oceanswims competition. This competition required swimmers to do at least five of the seven nominated swims over the season, with the best six swims counted. Each swim was awarded points out of 100 based upon your finish time and handicap based on age and gender. Only the top twenty swimmers were eligible to enter the prize draw, with the first placed swimmer having their choice of the two swimming holidays on offer. The winner had chosen a trip to Fiji, which left the Vanuatu trip up for grabs. I had managed to scrape into the top twenty, having done six of the seven swims over the season. I was very excited about winning the trip, as were various other people I had come to know on the circuit.

The briefing took place in  front of the clubhouse with the swimmers being told that the buoys were placed a fair way off the cliffs because of the weed and backwash close in. While I can understand why the organisers do that, it is a bit disappointing for these journey swims as swimmers could be encouraged to navigate themselves with fewer buoys. if they want to swim the shorter route closer to the cliffs they would have to deal with the backwash. If they wanted to swim further out they would swim a longer distance, but get the assistance of a current. We were also told that there was no timing chips as the cost of the system was equivalent to a rescue board for the surf club. Fair enough, we are trying to raise funds for the worthy cause. So when we finish we get a hand written time given to us, and then we give that time to the timekeepers. Simple and old-fashioned, and quite relaxed.

As I waited on the beach for my wave to enter the water, I once again watched the earlier two waves to see if there was any sweep. I did notice that the swimmers seemed to be pushed slightly to the south, which meant the left hand side of the start line would be a better place to start. Every now and then a nasty shore dump would break, and I thought that would make things interesting if we had to deal with that. But each of the starting waves were five minutes apart, and as we entered there was no need to even duck under a wave. 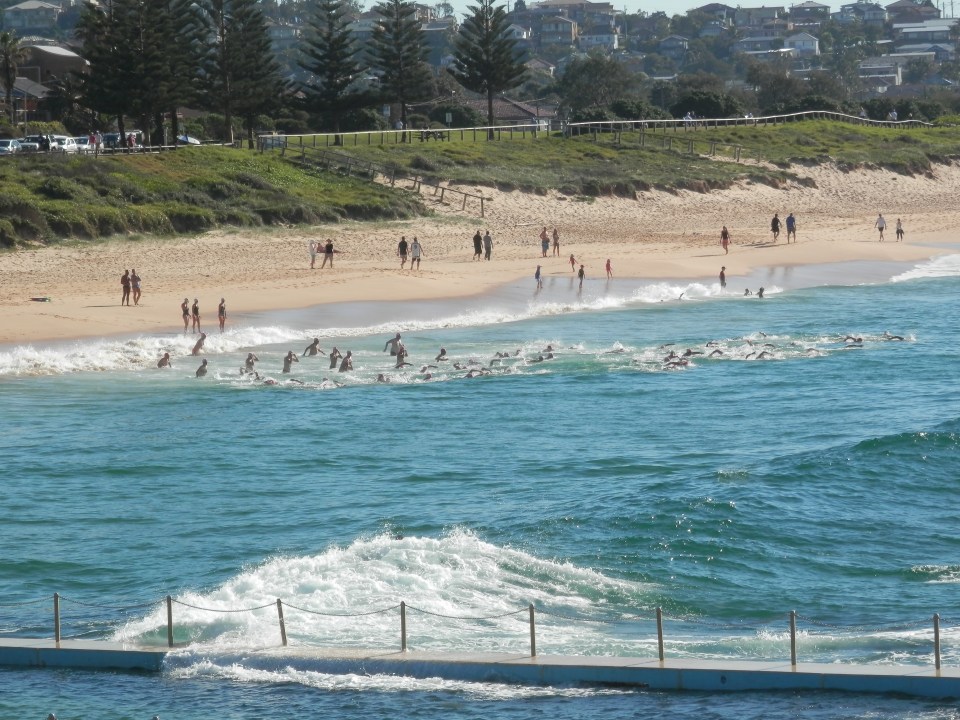 A wave of swimmers entering the water at the start

So we were off, and the water was quite warm. I had swum on ANZAC day on Thursday at Manly (see my previous blog entry), and again on Saturday with the Bold and Beautiful group when there was only 250 swimmers. The water today seemed warmer, but whether that was because it was later in the morning I am not sure. Regardless, it was divine swimming in the ocean in conditions like this, and it was difficult to remember that I was supposed to be racing. I was feeling a bit tired from the previous five days of swimming, so I wanted to swim slowly at the start, and increase the speed as the race progressed. By the first buoy I was towards the back of my wave, but I was not worried by that. A few swimmers annoyed me with their inability to swim straight, but I soon swam away from them. It was so enjoyable out there today. 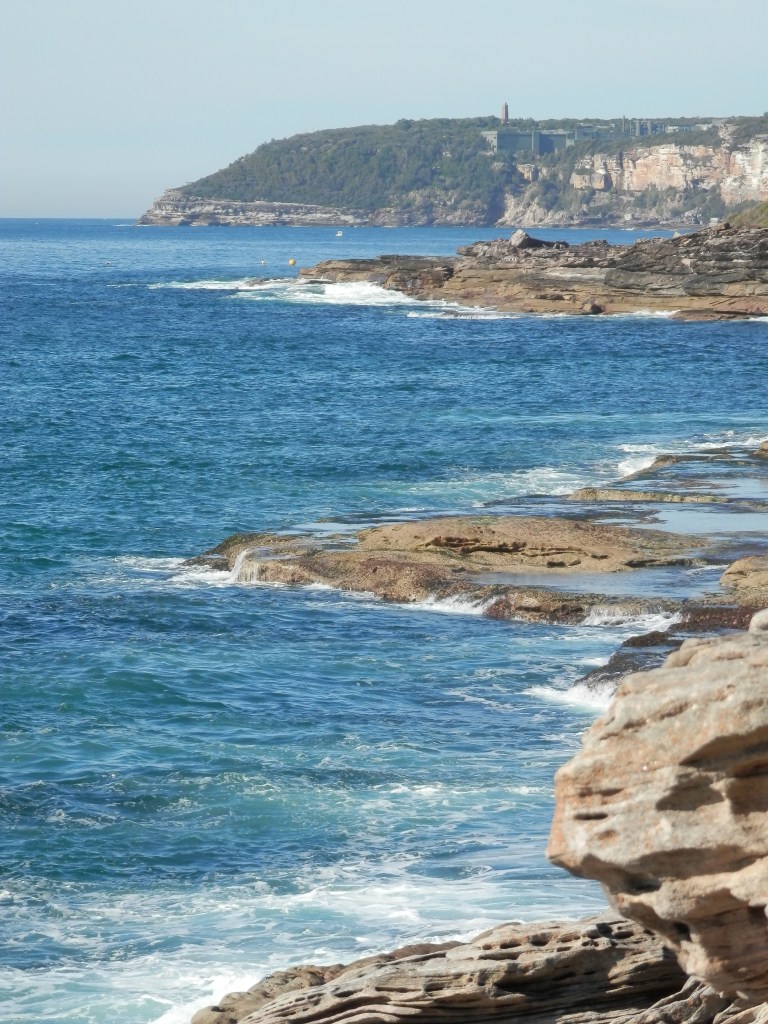 Cliffs along the course

The good thing about this swim was the large number of buoys to guide you on your way. Though the buoy that was a dark blue colour was difficult to pick out from a distance, but it really did not matter too much. There was only a small amount of chop to deal with, and I was feeling quite relaxed, as other swimmers in my wave were caught and passed. I even managed to pass some of the slower ones from the earlier wave which surprised me, and I admired their resolve to get to Freshwater no matter how long it took.

In what seemed no time we passed the big white buoy off Freshwater, which meant it was time to turn right and head towards the finish line. We had to go through two pink buoys and then get to the finish line at the northern end of the beach. I recalled that this side of the beach was more likely to have a rip, but I had not seen one when I walked past earlier. I did decide to head slightly south just in case, as there was still an occasional one metre wave coming through. I had been swimming in a pack, but they headed right, and I initially regretted my decision to head left due to the loss of drag. However, I did soon recover and swam past them on a more direct line towards the finish.

I wanted to try to swim hard towards the finish, as this was going to be my last swim for the season. So I upped the pace, and soon caught some other swimmers in my wave. It is always good to catch people, and go past them in the last part of the race. I hoped for a wave to catch, but once again I was as successful as creating world peace, so I had to swim all the way into the beach.

View of the finish line

I jumped up in the shallow water, lifted my knees and waded out, and even managed to run up to the finish line. I had hoped to do a time of around 36 minutes, and I was only a few seconds over that. I was quite pleased with that effort, and I was not exhausted like I had been earlier in the season. No doubt the additional training I had done lately was starting to pay off. I gave my time to the timekeepers, and then grabbed some fruit and a cold drink, and found some friends to chat to. I was very satisfied with my efforts, and pleased that I had been able to swim at Freshwater when conditions were not as challenging. At the time of preparing this report, the results are not available, which is one of the down sides of manual timing.

It was a glorious day, a fantastic way to finish my season. This really can be the best time of year to swim when the water is warm, clearer, smoother, and the sun is not as intense.

Swimmers catching a wave at the finish

As I drove away from the beach I realised that my season was over. But there was the prospect of  June trip to the South Pacific to keep up my interest.

2 Comments on “End of Season at South Curl Curl”