Posted on November 20, 2012 By greginthewater 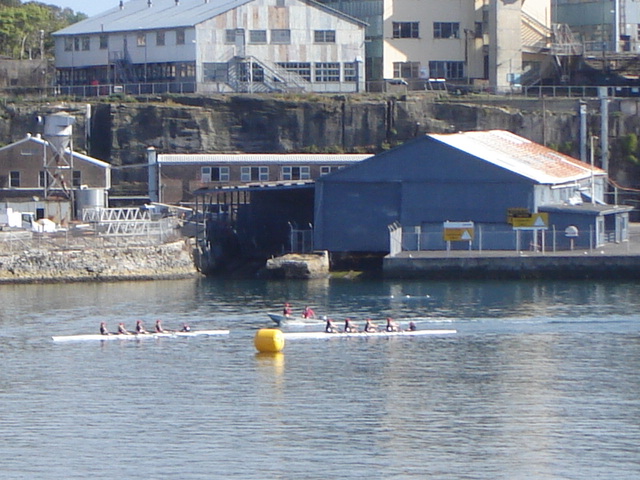 sculling past the buoys

The month of November seems to come round quicker each year. As the jacarandas blossom throughout the city, thoughts of ocean swimmers turn to the opening of the season. Once again the Cockatoo Island swim in Balmain marks the start of the year of swimming in the open water in Sydney.

It only seemed like yesterday when I completed the last of my four swims in New York City. Those swims had given me more experience and confidence, and plenty of t-shirts to show off at squad training. Yet the Big Apple has gone through a rough time since then, having an unwelcome visitor by the name of Sandy in late October. For those of you in Australia, this is the equivalent of a tropical cyclone hitting the northern coast of Tasmania.

I was reading about Liberty Island the other day. The Statue was opened to the public after extensive repairs on 28 October 2012, only to close again the next day due to the forecast storm. To date the island is yet to be reopened due to extensive damage to the wharves and the boardwalk around the monument. Coney Island and Brighton Beach were also severely impacted with many residents still facing issues with power supply and lack of  subway access. I saw photos of watermarks about five feet high on the boardwalk at the beach. The reports from CIBBOWS shows that the water is still too polluted to swim in, though the members are doing lots to help those adversely impacted by the storm.

And then there are the poor residents of Rockaway and Staten Island who were either washed away or burned down by fires. Thousands of residents are homeless, and the New York Marathon was cancelled.

It has been heartbreaking to see all those images and read the stories about the places I swam at in June and July this year. But I know that the indomitable spirit that the residents of that great city possess will unify the community to repair, renew and rejuvenate.

I had entered the Cockatoo Island swim in plenty of time, and even convinced some fellow squad members to swim in the harbour. Lots of open water swimmers will gladly swim at the beach, but refuse to swim in the harbour due to their fear of sharks. Sure there are bull sharks in the waterway, but there are a lot more in the ocean.

I was keen to see how my training over the last few months would be put into practice. I had been feeling stronger in the water lately, but it is one thing to feel that in the pool, another to feel it in the open water.

The day of the swim was perfect for swimming, with virtually no wind, light cloud cover and smooth water. Due to the potential impact of ferries arriving at the island, the waves were only one minute apart. This year I was in the second wave alongside the Irish Muppet and the Attorney Nemeses. The whistle went and the wave started in a maelstrom of arms and legs. Quite quickly I realised that my goggles were not a perfect fit (I had not tried them on before entering the water!). But despite that I was soon on the feet of another competitor in fairly clear water, heading for the right hand corner of the island.

Cockatoo Island has a rich history by Australian standards. It was used as a prison for many years in the 19th century, and there is a rumour that a bushranger escaped by swimming across to the mainland. After the prison closed, it was used for ship building and repair and various other industrial use. However, as these industries closed down in the late 20th century the island was left derelict and unloved. In recent years the island has been resurrected and is now a place to camp in Sydney, and is used for film and comedy festivals.

But the best thing about the island is that you can swim around it to start the swim season.

As I made it across the channel to the Island I was very happy with my speed and how strong I felt. My thoughts turned to recent training sessions where we had focused on high elbows to increase leverage on the pull through the water. I did notice when I kept my elbow high I could get more speed with the same effort and could get past other swimmers.

As we passed the ferry wharf (before the ferry arrived), the number of jelly blubbers increased, and so did someone behind me tapping my toes. That really annoys me, but I could understand it as the water was murky and it was difficult to see past your fingers when they entered the water. I had managed to get past several swimmers from the earlier wave by this time, and noticed that I was starting to swim away from others.

I managed to keep closer to the island this year than I had in previous years. This meant that I would not have to swim as far, and I could see the spectators on the island easier. They must have been amused to see all these people who pay good money to swim in a place like this.

By the time I had made it to the back of the island I found my energy levels dropping slightly. This year there was little wash from boats, and the water was still quite smooth. It was about this time that I noticed a familiar swim stroke slowly creeping up on my right. I wondered if this was the attorney, a person I has spent many hours following in the pool. I was surprised that he was behind me, as it was normally the case that I could not keep up with him in a long race. So let him get next to me so I could check whether he was wearing the uniform that we shared. It was him, so I decided to get on his feet for a while in order to draft.

The only problem with this plan was that he knew it was me and was determined to swim away from me. So we went stroke for stroke all the way to the turning buoy off the island where we had to turn right to get back to the finish line. As soon as we were around the marker I noticed that a pack of around six swimmers were heading to the right. I thought the finish line was more straight ahead, so I went that way which would be a shorter finish.

But in the end my plan did not pay off, as after we had negotiated the path through the moored yachts I was still behind this pack. I put in one more sprint to try to beat them, but to no avail. I got to the finish pontoon a couple of body lengths behind the attorney. He had beat me once more, but I was a lot closer than last year. I realised that going in a straight line by myself was shorter, but I was not able to draft off others. Yet the official results showed that we had the same time; one advantage of manual time-keeping.

So this was the fourth time I had done this swim, and I was able to feel stronger for longer and even concentrate a bit more on the technique I had practised in the pool many times. The season was under way again. Who knows what the season will bring this year. Will I do the short and long swims like last year, or would I only do the long swims? Will I do as many swims as last year? Only time will tell. But I am looking forward to it.

It is always fun to start the season in such a relaxed atmosphere.

5 Comments on “Return to Cockatoo Island”