Posted on January 26, 2012 By greginthewater 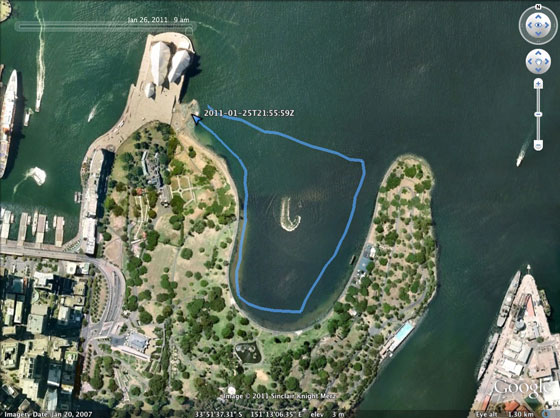 Aerial view of the course

Australia Day on January 26 is the day of the Sydney Harbour swim at the Opera House. Unlike previous swims I could not enter both races on the day as the 2.2 km race was scheduled to start shortly after the one km race, making it impossible to do both. So I only entered the longer swim. There was only a few from my squad doing this race, as they were saving themselves for the Palm Beach swim three days later. However Shayne and her daughter were hitting the water.

I was interested to see how almost one year of training would benefit my swimming as I could compare this event with the 2011 version when I finished in the top 45% of the field. I felt stronger and more confident of my ability, plus I had the advantage of also knowing the course. The course is very scenic. It starts in the water on the eastern side of the Opera House and swims across Farm Cove to Mrs Macquarie’s Chair. It then tracks around the edge of the Sydney Botanic Gardens to return to the start. The visuals are stunning with the Opera House and the Harbour Bridge clearly visible as you swim, plus the city skyline. Sometimes it can be quite distracting.

There had been lots of overnight rain, but fortunately the water quality was still good as I entered the start zone for my wave. My plan was to swim reasonably fast for as long as I could, and then settle into a slower pace until I got near the last buoy and then to sprint home. The start was good, all swimmers seemed to know where they were going, and I even managed to get into a clear patch of water fairly quickly. There was not much chop on the water, so it is was easy to settle into my familiar style.

Before long I was passing the outdoor cinema screen at looking at the views. I noticed that I was swimming with a couple of females from my age group, and they were slightly faster than me. This meant that I could sit on their feet and enjoy the drag. I did try to swim around them a couple of times when we came across slower swimmers, but I could not get around them. So I decided to sit in their feet and wait until the turn for home. At that point I did increase my pace, and I managed to swim around them. I was getting tired, but I knew that I wanted to beat them, so I kept up the pace.

The finishing line for this race is easy to spot from a distance: you just look for the sails of the Opera House and then aim slightly to the left. I remembered that drill from training where we look forward as we breathe, and I even managed to maintain my pace whilst doing just that. The finish line for this event was also in the water, so as you passed the line you had to hold up your wrist to ensure the timing tag registered. This saved the drama of climbing out on a ladder and a wet timing mat.

So I had finished, in a time of just over 35 minutes for the 2.2 km distance, placing 150th in the field of 450. This was an improvement on last year so I was happy with that. I just hoped I had enough left for the swim on Sunday.

I had also beaten quite comfortably the Federal Leader of the Opposition who swam in his infamous speedos. He was gracious after the race to let other swimmers have their photo taken with him, and their was no sign of security. It is good to live in a nation where this can happen. Needless to say he went to Canberra straight from the race and made some comments about the Aboriginal Tent Embassy that resulted in him and the prime minister being forcibly removed from a function by security staff. Oh well at least he had a relaxing swim to start the day.

My wife had wandered down to the race just before we started. I found her after the race sitting in the Botanic Gardens enjoying the rare sunshine. We walked home passing the display of antique vintage and classic cars. Of course we had to stop for a beer to celebrate the nation’s birthday.