Posted on November 20, 2011 By greginthewater

After my trip to New York, I headed back to the squad to keep up the training. I was still in the second fastest lane, but I was slowly moving up the swimming order within the lane. I was finding that I was making more of the time repeats in the lane. That told me I was getting stronger and faster in the water. I had managed to swim over fifty km in training each of two months, so I was keen to see how much I had improved in the open water.

I entered the Cockatoo Island swim in Sydney Harbour and realised this was the third consecutive year time I had entered this swim. I even convinced a few fellow squad members to join me, even though they had  concerns about the possibility of sharks. I found this odd as they had no issues in swimming in the ocean with the “protection” of a shark net. 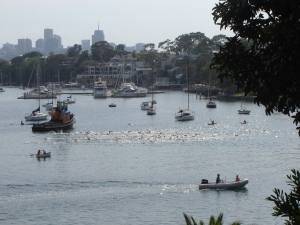 Once again the weather was good for the swim, which was one of the first for the new 2012 swimming season. This time I was in the first wave, which was no reflection of my ability but a mere reflection of being over forty and male. I had a plan for this swim to swim on Michael’s feet around the island and then swim past him on the way back. We started in the water together but I lost him as we swum past the moored boats on the swim across to the island. Oh well that is the thing about plans in open water, they rarely materialise.

The course was very familiar to me, and I had learnt at squad training to breathe on both my right and left sides. So this time I could breathe left and look at the island as I swam around it. Once again I had settled onto my normal pace and kept it up around the island. Despite this I had the faster swimmers in some of the later waves swimming past me, and I had not managed to sight Michael.

Once I had swum around the island, I turned for home and noticed that most other swimmers had swum away from the turning buoy, increasing the distance they had to swim. I swam by myself for a while until I caught a number of other swimmers on the reach back to the finish line. I remembered the sighting drills from training and navigated quite well, and increased my pace. I made it to the finish line and was glad of the hands that reached down to assist me in getting out of the water. I was also happy that this swim was using timing chips this year, as it makes the times more accurate.

As I walked back to the Dawn Fraser Pool to get my complimentary bbq and fruit I kept an eye out for Michael. I had a choice to make: whether to eat the bacon and sausage sandwich, or the sliced mango (the fruit won and it was divine). When the results were posted I realised that he had finished nearly forty seconds ahead of me. My time though was two minutes faster than the previous year, and I had finished in the top half of the field. This was evidence that my swimming was improving. I was pleased with my efforts.

After the swim my wife and I enjoyed a walk down Darling St in Balmain and lunch at the Riverview Hotel which was owned at one time by Dawn Fraser. My thoughts turned to the swim for next week.