Posted on January 26, 2011 By greginthewater 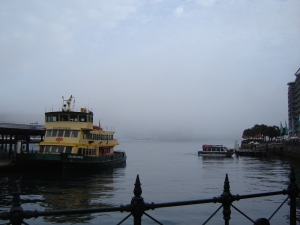 I had mapped out a plan for swims for the season, and the one at the Opera House on Australia Day was on the list. I was familiar with the course, and it was a harbour swim which suited my confidence levels. The swim was scheduled to be two and a half km so it would test my fitness.

When I arrived at Circular Quay I was greeted with a fog that shrouded the Harbour Bridge. This was quite rare for Sydney as fogs are much more common in early winter. This fog meant it would be good conditions for the event. The fog turned out to be a sea fog that rolled in up the harbour due to the warm water. Beached on hte coast like Bondi had fog until early afternoon, but I was fortunate that the fog lifted around the Opera House mid morning.

When I arrived for registration I was told I was in the Elite Wave with Olympic swimmers. After a short discussion the organisers saw the folly of this and I was placed in my age category. Good I would not be swimming by myself.

I watched a latge number of people swim the early one km event, and I wondered if I would ever be strong enough to do both. They all enjoyed themselves as it really is quite an iconic course.

Finally it was my turn to jump into the harbour for our in the water start. I was feeling a tad worried that I would not be strong enough to swim at a comfortable speed as I had not done a great deal of training since my last swim. The hooter started and off we went in the usual splash of arms and legs. My established strategy was to swim at an easy pace and try and make it to the end of the course. Fairly soon I was swimming with those of similar ability and I had plenty of time to admire the view.

When I turned the last buoy to turn for home I felt very tired and wondered if I would be strong enough to make it to the finish line. I slowed down and told myself that I had done longer swims and that I had to finish. My arms felt very heavy and the finish line at the Opera House seemed to be getting no closer.

Finally I made it and climbed up the ladders and lumbered over the timing mats to record my time. I was quite fatigued and gulped down the free drinks on hand. While my time of just over forty minutes was quite respectable for the distance I soon realised that the course was not the advertised length. I was placed in the top 60% of the field of 400 swimmers. I knew that I could do better, but I would have to come up with a plan to improve.

It was a great way to celebrate the birthday of our nation. 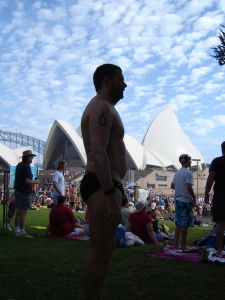